Have you been long waiting for an update on KGF Chapter 2? So here it is! On March 3rd, 2022, director Prashanth Neel dropped a new poster to announce the details of the trailer. 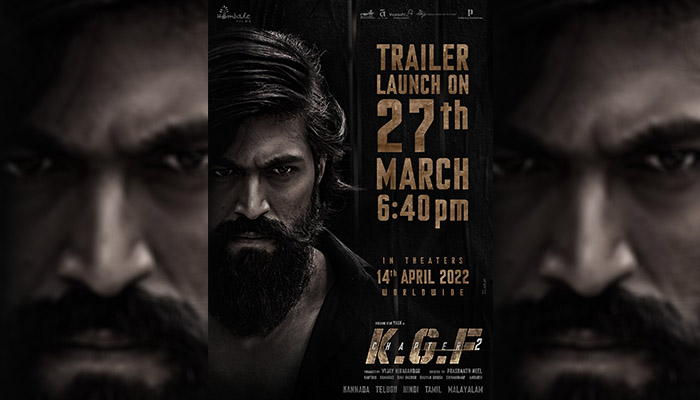 Taking to social media, Prashanth Neel and Co. announced merrily that the ‘K.G.F: Chapter 2’ will be out on the 27th of March, exactly at 6:40 pm. “There is always a thunder before the storm!” wrote Neel in his tweet as he shared a special poster for the announcement.

As KGF: Chapter 2 is a pan-Indian film, Prithviraj Sukumaran, a popular director and producer, will be presenting the film all across Kerala. The producer took to Twitter and shared a photo with the KGF team to share his excitement about being part of the big project. He also wrote, “Looking forward to this association of ours @VKiragandur Mind blown by what I have seen of #KGF2 @prashanth_neel has set a whole new standard with this one!.”

KGF Chapter 2, the Kannada origin movie stars Rocking Star Yash, which is a sequel to KGF Chapter 1, was released in 2018. The sequel also stars Bollywood stars Sanjay Dutt as the antagonist Adheera and Raveena Tandon as Ramika Sen. While Prakash Raj will be seen in a prominent role; several other characters from the first part will be seen continuing their character in the sequel.

KGF: Chapter 2 has constantly been delayed since 2020 due to the Coronavirus pandemic. Now that the situation has settled down in the country, the film is slated to release on April 14 without any further postponement yet again.