Yash Raj Films has locked its exciting slate of films for 2021 and the company is signaling its strong intent to bring audiences back to experience films on the big screen. Here are the official release dates: 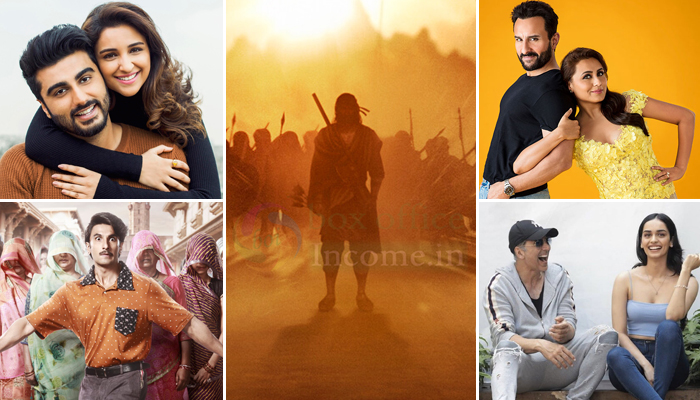 1- Sandeep Aur Pinky Faraar: Directed by Dibakar Banerjee, and starring Arjun Kapoor and Parineeti Chopra was earlier scheduled to release in March 2020 but was postponed due to the nationwide lockdown. The film’s trailer was also released last year. Now, the SAPF ill hit screens on 19 March, 2021.

2- Bunty Aur Babli 2: Directed by Varun V Sharma, starring Saif Ali Khan, Rani Mukerji, Siddhant Chaturvedi and debutant Sharvari, finished its filming during the pandemic. The film brings back Saif and Rani after films like Hum Tum, Tara Rum Pum and Thoda Pyaar Thoda Magic. It will have a theatrical release on 23 April 2021.

3- Shamshera: Ranbir Kapoor’s Shamshera will release on 25 June, directed by Karan Malhotra. Also starring Sanjay Dutt and Vaani Kapoor. Ranbir and Sanjay previously shared the screen during the end credits song of Sanju. The film is said to be a dacoit drama set in the 19th century. Sanjay Dutt shot for portions of the film during his cancer treatment. Sanjay had previously worked with director Karan in Agneepath which got him a lot of acclaim.

4- Jayeshbhai Jordaar: Directed by Divyang Thakkar, stars Ranveer Singh and Shalini Pandey in lead roles. Shalini, who is known for her performance in Arjun Reddy, marks her Hindi film debut with this film. Ranveer is playing a Gujarati businessman in the film, which also stars Ratna Pathak Shah and Boman Irani. The film is all set to hit the theatres on 27 August 2021.