With Hrithik Roshan and Tiger Shroff’s latest movie, War’s blockbuster performance, things seem to be turning for the better for Bollywood. War has already become the highest grossing Bollywood movie of 2019 and it is only in its second week of running. 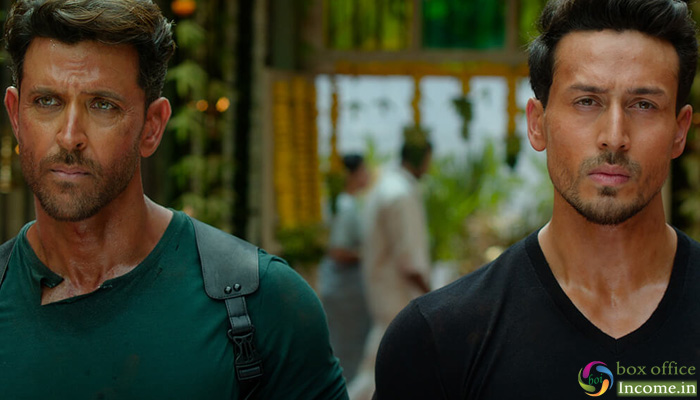 Directed by Siddharth Aanad, War has got succeed to impress everyone including most of the critics and gained positive word of mouth. After a humongous opening, the movie remained super strong throughout the first week and did the business of 159.70 crores in weekend and 68.80 crores in weekdays from 4200 screens.

In the second weekend, once again it showed remarkable growth and registered the business of 31.05 crores with 7.10 crores of Friday, 11.20 crores of Saturday and 13.20 crores of Sunday. After 13 days of release, total collection of Yash Raj Film’s presentation was recorded as 260 crores.

Then on 2nd Monday, War garnered the business of 4.40 crores. On the next day i.e. normal Tuesday, the movie witnessed abrupt drop and minted the amount of 3.90 crores. With this, total collection of Hrithik Vs Tiger after 14 days, has become 268.30 crores at domestic box office.

From its dubbed Tamil & Telugu version, War raked the business of 9.85 crores in the 9-days opening week. It witnessed a little jump over the weekend and bagged the amount of 0.50 crores on Friday, 0.60 crores on 2nd Saturday and 0.70 crores on Sunday.

On 2nd Monday, War had witnessed a further drop in footfalls and bagged the amount of 0.35 crores. On the next day i.e. 2nd Tuesday, it managed to garner 0.30 crore and raised its 14 days total collection to 12.30 crores nett. While the total collection of War has become 280.60 crores including 268.30 crores Hindi and 12.30 crores Tamil + Telugu.