The trailer of Tadap was recently unveiled, it gave audiences a glimpse of a raw, intense, passionate and musically uplifting journey that the movie is set to be. The romantic action drama starring Ahan Shetty and Tara Sutaria and now the film’s first music track is starring the lead actors is all set to come out on 2nd November. 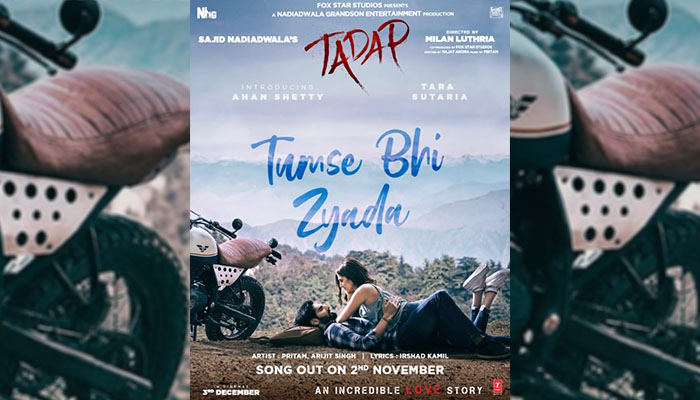 Ahan Shetty who is all set to make his debut with his film took to his social media handle to reveal to fans that the song Tumse Bhi Zyada will come out on November 2. A video of Ahan Shetty riding a bike with Tara Sutaria and then kissing intensely surely sets the mood for the song and fans can’t wait for it to come out soon enough.

Directed by Milan Luthria, the song is crooned by Arijit Singh and Pritam and is expected to strike the right chord with the hearts.

‘Tadap’ will feature high-octane action sequences, which will keep the audience on the edge of their seats. The much-awaited flick is the Hindi remake of Telugu film ‘RX 100’.