This Friday released, the Hindi biographical drama The Sky Is Pink has unexpectedly taken a slow start at the box office but gathered positive reactions. On Saturday as well, it didn’t witness the required jump in footfalls and remained almost average. 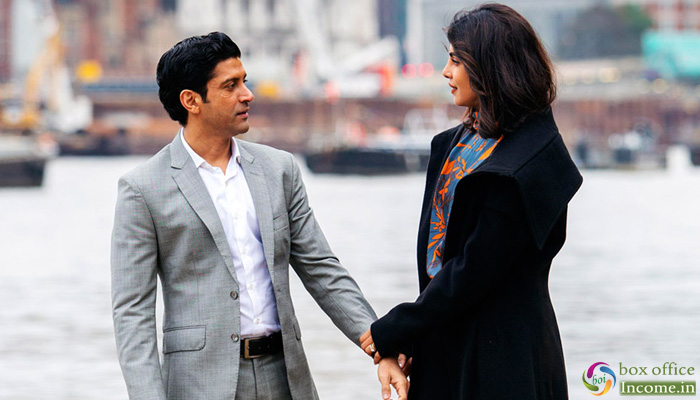 Produced by RSVP Movies, Roy Kapur Films, Purple Pebble Pictures and Ivanhoe Pictures, the biograhical drama The Sky Is Pink has got succeed to hit the target right among the audience in metros. From critics also, it has received mostly favourable reviews and gathered a positive word of mouth.

On Friday, Shonali Bose’s directorial was opened at a dull note with only 10-13% occupancy in the morning shows. Over the evening & nights shows, the movie recorded a decent growth and somehow managed to collect the amount of 2.50 crores, which is lower than Priyanka’s 2016′ Jai Gangaajal (5.50 crores).

On Saturday, due to last week released Joker and War performs very strong, so The Sky Is Pink witnessed a limited jump post noon shows and minted the amount of 4 crores. With this, the total collection of the movie after 2 days has become 6.50 crores nett at the domestic box office.

As per the current trend, Priyanka Chopra and Farhan Akhtar starrer is expected to rake around 10+ crores by the end of this weekend. Monday will be very crucial for The Sky Is Pink because that will give an idea about its run at the box office in the coming weekdays.