The Lion King has proven to be another big bet for Disney in India. It has joined a string of Disney movies to have set the box office on fire in India. Its earnings even as it saw strong competition from Hrithik Roshan’s Super 30 and Shahid Kapoor’s Kabir Singh, both of which are witnessing a fantastic run at the box office. 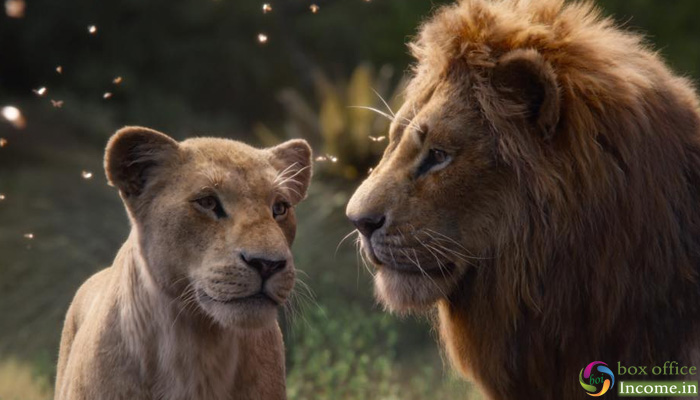 Directed by Jon Favreau, the Hollywood movie The Lion King has got succeed to entertain many in theatres and received mostly positive reviews from the critics. As a result, it has gained a good word of mouth and getting rave response all across the country.

After an excellent start despite Hrithik’s Super 30, The Lion King took a significant growth over the opening weekend and did the business of 54.75 crores which included 11.06 crores on Friday, 19.15 crores on Saturday & 24.54 crores on Sunday with a solid response from the single screens.

Now, The Lion King is running on weekdays and still flying high at the box office. On Monday, The Lion King faced a drop of 28.58% than Friday and raked the business of 7.90 crores. On the next day i.e. Tuesday, Walt Disney Pictures’s presentation witnessed decent drop and minted the amount of 7.02 crores.

With this, the total domestic collection of The Lion King after 5 days has become 69.67 crores. There has been a lot of curiosity around the Hindi-dubbed version of The Lion King in India as Shah Rukh Khan and his son Aryan have lent their voice for the film.

The Lion King tells the story of Simba, who is connived to leave the kingdom after Scar orchestrates the death of King Mufasa to usurp the throne. Simba is aided by his friends to return home and fight for what is rightfully his.