After much hype and promotion we finally see the release of two starkly contrasting films in the form of the Ajay Devgn starrer Tanhaji: The Unsung Warrior and the Deepika Padukone starrer Chhapaak. While the first is a period flick about a well-known warrior the second tells the story of the acid attack survivor Laxmi Agarwal. 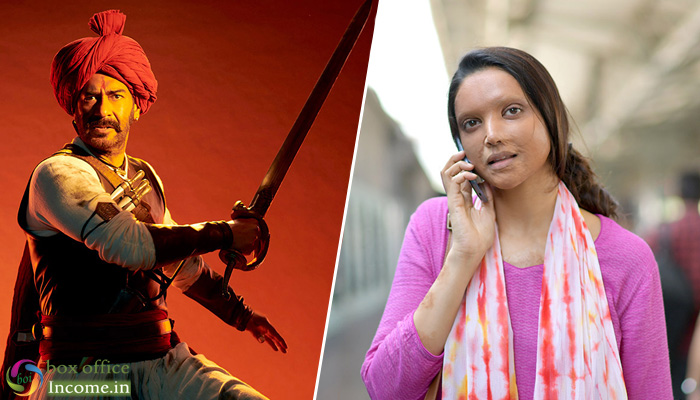 Directed by Om Raut, Tanhaji: The Unsung Warrior is getting very positive reviews from critics as well as cinegoers. The strength of this period action flick was proved when it was started comparing with Deepika Padukone starrer adjacent release Chhappak. Tanhaji is being liked by everyone and getting more positive reactions than Chhapaak.

On the opening day, the movie has recorded the strong occupancy of 30-32% across the country. Tanhaji: The Unsung Warrior has minted the amount of 15.10 crores from 3880 from Indian screens. Because of positive audience response, it is expected to show good growth on Saturday and Sunday as well.

On the other hand, the much-awaited Hindi film Chhapaak has also taken a decent opening with positive reviews. Deeepika Padukone and Vikrant Massey starrer biographical-drama has lived up to the expectations of the audience and gained a good word of mouth.

On Friday, Meghna Gulzar’s directorial had started its journey at an ordinary note with around 15-20% occupancy in the morning. Post noon shows, it recorded a significant jump in footfalls and done the business of 4.77 crores nett from 1700 Indian screens.