Ajay Devgn, Saif Ali Khan and Kajol starrer Tanhaji: The Unsung Warrior has successfully maintained a solid pace throughout the opening weekend. While Deepika Padukone and Vikrant Massy starrer Chhapaak has managed to register an overall decent weekend despite a ordinary start at the box office. 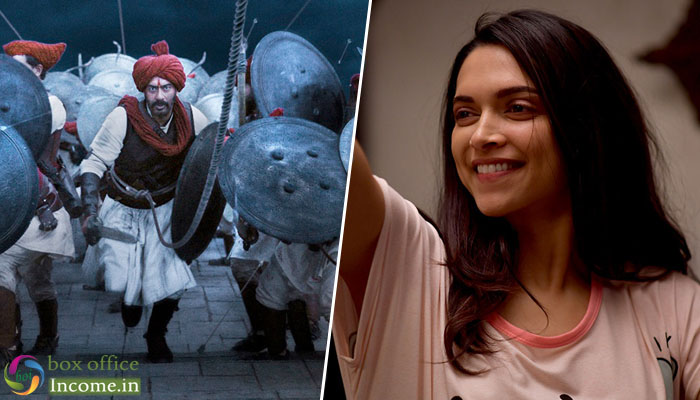 Directed by Om Raut, the Hindi period drama Tanhaji: The Unsung Warrior has expectedly got succeed to entertain many in theatres and gathered a good word of mouth. From critics, it has received mostly positive reviews for its gripping storyline backed by the commendable performances of all the actors.

On Friday, T-Series Films & Ajay Devgn Films’ presentation was opened at an excellent note and did the business of 15.10 crores. On Saturday, it took a good jump and minted 20.57 crores. On the next day i.e. Sunday, the film has managed to collect 26.26 crores and raised 3 days total collection to 61.93 crores from 3880 screens nationwide.

In parallel, Meghna Gulzar’s Chhapaak has also got succeed to impress critics with its storyline backed by the strong performances of leading actors. But the film hasn’t received the desired response from the audience and remained the second choice of viewers throughout the weekend.

Fox Star Studios and Deepika Padukone’ presentation had started the journey at an ordinary note and scored only 4.77 crores on Friday. Over the weekend, it took a good jump and minted 6.90 crores on Saturday & 7.35 crores on Sunday. After 3 days, its total collection has become 19.02 crores from 1700 screens.