Ajay Devgn, Saif Ali Khan and Kajol starrer Tanhaji: The Unsung Warrior had successfully passed the opening weekend at a solid note and now super-strong on weekdays as well. While the adjacent release Chhapaak had remained overall dull in the weekend and now struggling at the box office. 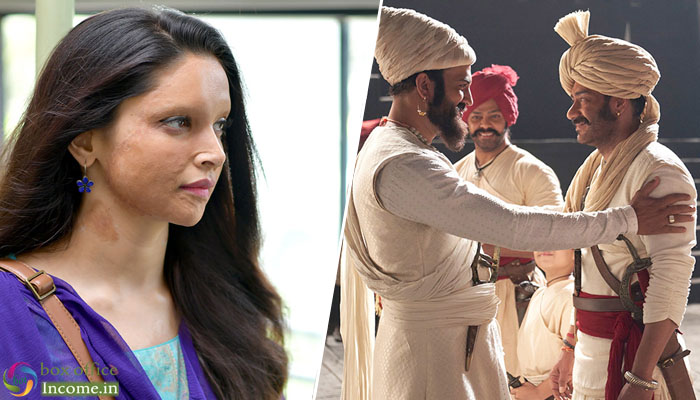 Directed by Om Raut, the biographical period action film has gathered mostly positive reviews from critics for its relevant storyline backed by terrific performances of all actors. In the weekend, it did the business of 61.93 crores in the weekend that included 15.10 crores on Friday, 20.57 crores on Saturday & 26.26 crores on Sunday.

T-Series Films & Ajay Devgn Films’ production Tanhaji had entered on weekdays at a strong note and raked the business of 13.75 crores on Monday. On the next day i.e. Tuesday due to Makar Sakranti holiday, the film has managed to collect 15.28 crores and raised its 5 days total collection to 90.96 crores nett at the domestic box office from 3880 screens.

On the other hand, Deepika Padukone starrer Chhapaak has also received positive reviews from critics but not getting a wonderful response from the Indian audience. In the weekend, it had garnered 19.02 crores with 4.77 crores on Friday, 6.90 crores on Saturday & 7.35 crores on Sunday.

Then on weekdays, Meghna Gulza’s directorial has dropped and did the business of 2.35 crores on Monday. On the next day i.e. Tuesday, Chhapaak has managed to collect 2.55 crores and raised 5 days total collection to 23.92 crores nett from 1700 screens nationwide.