Ajay Devgn’s 100th film Tanhaji: The Unsung Warrior continues to dominate the box office. After a fantastic opening week, the period drama has started the second weekend at a strong note. While, Deepika Padukone and Vikrant Massey starrer Chhapaak remains low on its second week. 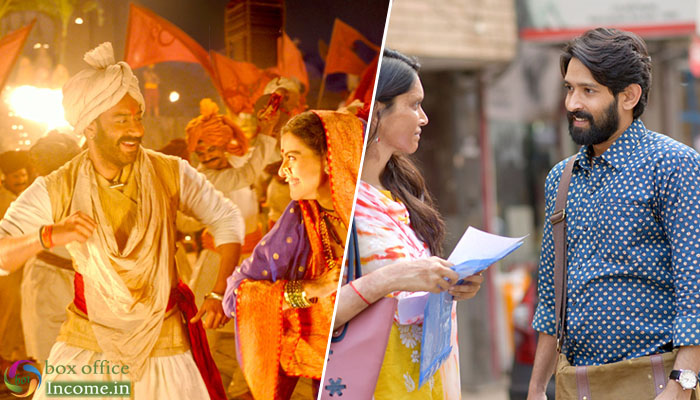 Starring Ajay Devgn, Kajol and Saif Ali Khan, Om Raut directorial has received very positive reactions from the critics as well as the audience and gathered a solid word of mouth. As a result, it did the business of 118.91 crores in the first week with 61.93 crores in the weekend and 56.98 crores on weekdays.

Now, Tanhaji: The Unsung Warrior is running in the second weekend and still has a terrific hold over the audience. On 2nd Friday, it showed a solid hold and minted the amount of 10.06 crores. On 2nd Saturday, after a fair jump, it managed to collect 16.36 crores and raised its 9 days total collection to 145.33 crores nett at the domestic box office.

On the other hand, Deepika Padukone and Vikrant Massey starrer Chhapaak was started its journey at an ordinary note due to mixed reactions and did the business of 28.38 crores in the first week with 19.02 crores in the weekend and 9.36 crores on weekdays.

Meghna Gulzar’s directorial biographical drama is now running in the second week and minted the amount of 0.95 crore on its 2nd Friday. On 2nd Saturday, with a little jump, it managed to collect 1.40 crores and raised 9 days total domestic collection to 30.73 crores nett.