Ajay Devgn starrer Tanhaji: The Unsung Warrior is enjoying a solid run at the box office on weekdays after an excellent opening weekend and heading to register a strong week. While the adjacent biggie Chhapaak has got failed to attract enough audience and now struggling at the box office. 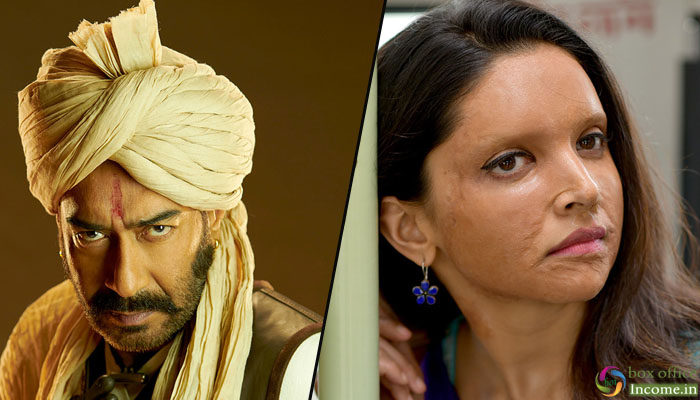 Starring Ajay Devgn, Saif Ali Khan and Kajol in lead roles, the Hindi period drama has expectedly entertained many in theatres and gathered a good word of mouth. In the weekend, at a strong note, it had raked the business of 61.93 crores that included 15.10 crores on Friday, 20.57 crores on Saturday & 26.26 crores on Sunday.

Then on weekdays as well, despite some drop, Om Raut’s directorial Tanhaji had bagged the amount of 13.75 crores on Monday & 15.28 crores on Tuesday. On the next day i.e. Wednesday, it has managed to collect 16.72 crores and raised 6 days total collection to 107.68 crores nett from 3880 screens nationwide.

On the other hand, the adjacent Hindi release Chhapaak has also received mostly positive reviews from critics as well as the audience and gained a good word of mouth. Due to clash, it had remained underperformed in the weekend and did the business of 19.02 crores with 4.77 crores on Friday, 6.90 crores on Saturday & 7.35 crores on Sunday.

Deepika Padukon and Vikrant Massey starrer biograhical drama is now running on weekdays and had garnered the business of 2.35 crores on Monday & 2.55 crores on Tuesday. On the next day i.e. Tuesday, Meghna Gulzar’s directorial has managed to collect 2.61 crores and raised 6 days total collection to 26.53 crores nett.