Om Raut’s “Tanhaji: The Unsung Warrior” has shown healthy growth on Saturday, despite clashing with “Chhapaak”. While, Meghna Gulzar’s Chhapaak has also witnessed decent growth after an ordinary start. Both the films has done good collection at the Indian box office on the second day. 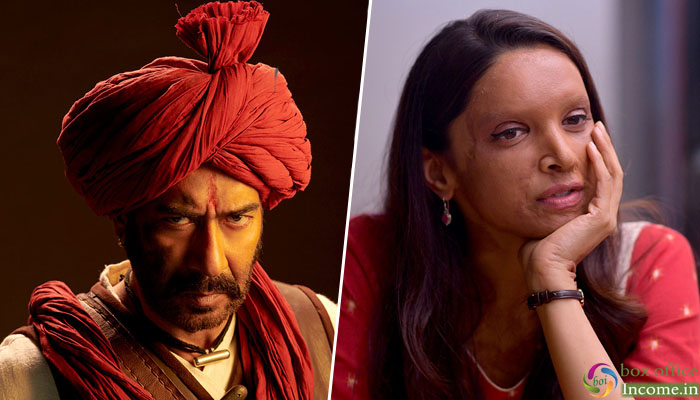 Ajay Devgn, Saif Ali Khan and Kajol starrer Tanhahi: The Unsung Warrior has released with good craze among audience on 3880 screens in India and getting very strong word of mouth now. It has received super positive reviews from critics as well as movie goers.

On the opening day, Tanhaji: The Unsung Warrior was recorded the overall occupancy of 35% across the country and minted the amount of 15.10 crores on Indian screens only. Because of the strong word of mouth, it has has done the business of 20.57 crores as its second day collection. After 2 days, its total collection has become 35.67 crores from 3880 screens including Hindi & Marathi versions.

On the other hand, Meghna Gulzar’s directorial Panipat has also convinced the critics with its gripping storyline backed the solid performances of lead actors Deeepika Padukone and Vikrant Massey. But still, it is not getting the desired response from the audience.

On Friday, Chhappaak had started the journey at an ordinary note and managed to collect the opening business of only 6.90 crores. On Saturday, it has taken a good jump and bagged the amount of 6.90 crores. After 2 days, its total collection has become 11.67 crores nett from 1700 screens.