Ajay Devgn, Saif Ali Khan Kajol and Sharad Kelkar starrer Tanhaji: The Unsung Warrior is enjoying an exceptional run at the box office since its release. After registering the highest opening week of the year so far in Hindi Cinema, the film has now joined the 150-crore club after the 10 days of release. 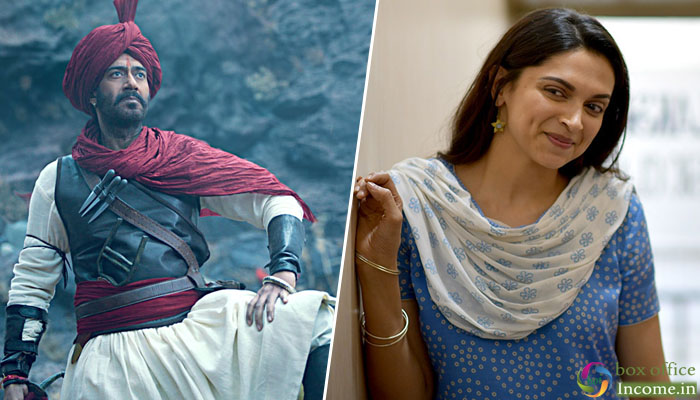 Om Raut’s directorial has got succeed to entertain critics as well as audience and gathered a solid word of mouth. In the opening week, it had garnered the business of 118.91 crores that included 61.93 crores in the weekend and 56.98 crores on weekdays from 3880 screens.

Then in the second weekend, Tanhaji has maintained a good trend and did the business of 10.06 crores on Friday. Over Saturday & Sunday, it took a solid jump and minted the amount of 16.36 crores & 22.12 crores respectively. After 10 days, its total collection has become 167.45 crores nett at the domestic box office.

On the other hand, last week released Deepika Padukone and Vikrant Massey starrer Chhapaak has got failed to make the desired impact on viewers and did the business of 28.38 crores in the first week with 19.02 crores in the weekend and 9.36 crores on weekdays.

Meghna Gulzar’s directorial started its second weekend on a low note and bagged the amount of 0.95 crore on 2nd Friday. Over 2nd Saturday & 2nd Sunday, Chhapaak took a good jump and collected 1.40 crores & 1.75 crores respectively. With this, its 10 days total domestic collection has become 32.48 crores nett.