Varun Dhawan and Shraddha Kapoor starrer Street Dancer 3D has remained decent on weekdays and registered an ordinary week at the domestic box office. While the adjacent release, Kangana Ranuat and Jassie Gill starrer Panga has shown a steady performance throughout. 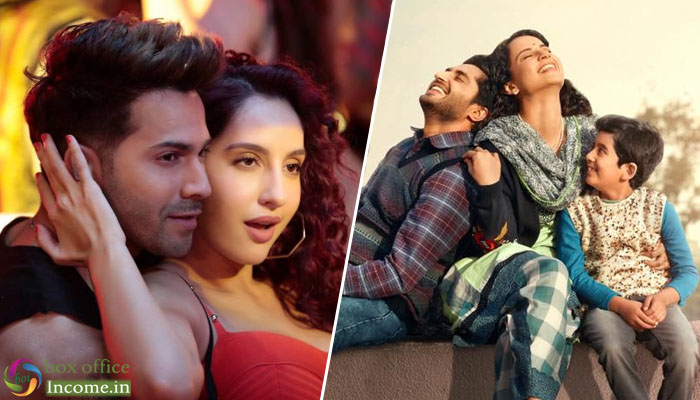 Directed by Remo D’Souza, the dance drama got failed to convince many critics and received mixed reviews. As a result, it had shown decent growth over the weekend and did the business of 41.23 crores that included 10.26 crores on Friday, 13.21 crores on Saturday & 17.76 crores on Sunday.

On weekdays, Street Dancer 3D had recorded a significant drop in footfalls initially but remained steady afterward and minted the amount of 4.65 crores on Monday, 3.88 crores on Tuesday & 3.58 crores on Wednesday. Then on Thursday, it managed to collect 3.43 crores and raised 7 days total collection to 56.77 crores nett.

On the other hand, the adjacent release Kangana Ranaut, Richa Chadha, Neena Gupta and Jassie Gill starrer Panga has received mostly positive reviews but still not getting the desired response from the audience across the country. In the first 3 days, it had raked 14.91 crores with 2.70 crores on Friday, 5.61 crores on Saturday, and 6.60 crores on Sunday.

On weekdays, Ashwiny Iyer Tiwari’s directorial sports-drama has witnessed a usual drop in footfalls but still remained steady and bagged the amount of 1.65 crore on Monday, 1.65 crore on Tuesday & 1.62 crore on Wednesday. On the next day i.e. Thursday, the film has garnered the business of 1.53 crore and raised its 7 days total domestic collection to 21.36 crores nett.