After a good opening weekend, Ayushmann Khurrana and Jitendra Kumar starrer Shubh Mangal Zyada Saavdhan has now entered in weekdays at a decent note. While the adjacent release Vicky Kaushal’s Bhoot: The Haunted Ship has recorded a usual drop in footfalls and passed Monday at a low note. 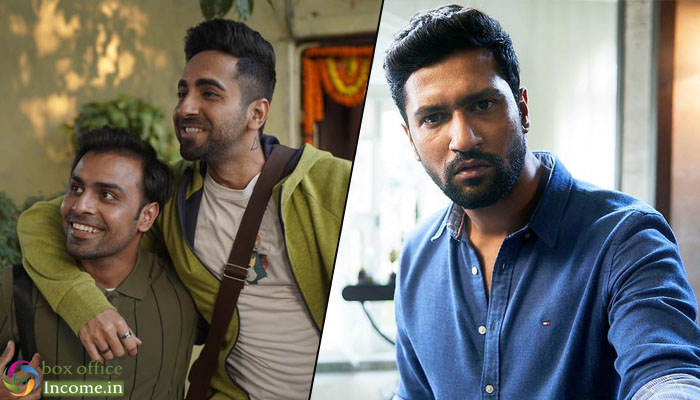 Directed by Hitesh Kewalya, co-starring Neena Gupta and Gajraj Rao, the romantic comedy drama has got succeed to convince many critics and received mostly positive reviews. From the audience as well, it is getting favourable reactions and as a result, running decently at the box office since its release.

In the weekend, SMZS had raked the business of 32.66 crores that included 9.55 crores on Friday, 11.08 crores on Saturday & 12.03 crores on Sunday. On Monday, it has witnessed a slight drop and managed to collect 3.87 crores. After 4 days, its total collection has become 36.53 crores nett.

On the other hand, Bhanu Pratap Singh’s directorial horror drama film Bhoot has gathered a mixed word of mouth and got failed to witness expected results at the box office. In the opening weekend, it had garnered the business of 16.26 crores with 5.10 crores on Friday, 5.52 crores on Saturday & 5.74 crores on Sunday.

On Monday, Vicky Kaushal, Bhumi Pednekar, Ashutosh Rana, and Meher Vij starrer Bhoot: Part One: The Haunted Ship has dropped abruptly as compared to the previous day and managed to collect 2.32 crores. After 4 days, its total collection has become 18.68 crores at the domestic box office.