After a decent opening on Friday, Ayushmann Khurrana latest offering Shubh Mangal Zyada Saavdhan has witnessed a good jump in footfalls on Saturday, while the adjacent release Bhoot The Haunted Ship has also shown growth in metro cities. 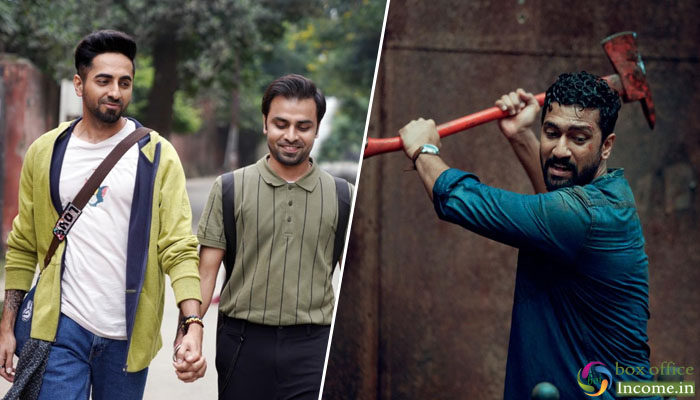 Starring Ayushmann Khurrana, Jitendra Kumar, Neena Gupta, and Gajraj Rao in lead roles, Hitesh Kewalya’s directorial has got succeed to entertain the audience as well as critics completely. As a result, it did the opening business of only 9.55 crores.

On the next day i.e. Saturday, Shubh Mangal Zyada Saavdhan has recorded a decent jump in footfalls and managed to collect 11.08 crores. After 2 days, the total collection of T-Series and Colour Yellow Productions’s production has become 20.63 crores nett at the domestic box office.

On the other hand, Vicky Kaushal, Bhumi Pednekar, Ashutosh Rana, and Meher Vij starrer Bhoot: The Haunted Ship has got failed to convince the critics and received mixed reviews. While from the audience, it also getting a mixed reaction nationwide.

On the opening day, Bhanu Pratap Singh’s directorial was opened at a decent note and registered the business of 5.10 crore. On the next day i.e. Saturday, it has recorded a normal jump in footfalls and minted the amount of 5.52 crores. After 2 days, its total domestic collection has become 10.62 crores nett.