Ayushmann Khurrana and Jitendra Kumar’s Shubh Mangal Zyada Saavdhan released on February 21. The film is written and directed by Hitesh Kewalya and maintains its steady run at the box office. While the adjacent release Vicky Kaushal’s Bhoot: Part One – The Haunted Ship has remained dull. 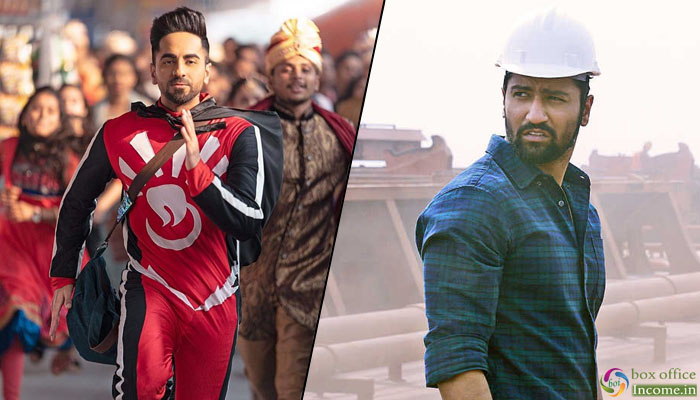 Co-Starring Gajraj Rao and Neena Gupta, the Hindi romantic comedy film Shubh Mangal Zyada Saavdhan has got succeed to entertain many viewers and gathered a positive word of mouth. As a result, it had raked the business of 44.84 crores in the opening week that included 23.20 crores in the weekend and 12.18 crores on weekdays.

T-Series and Colour Yellow Productions’ is now running in the second week and had started the weekend at a good note by collecting 2.08 crore on Friday. With a healthy jump, it has managed to collect 3.25 crores on Saturday and 4.06 crores on Sunday. After 10 days, its total collection has become 54.23 crores nett.

On the other hand, Bhanu Pratap Singh’s directorial horro drama film Bhoot: The Haunted Ship has received mixed reactions from viewers and unfortunately got failed at the box office. In the first week, it had raked the business of 24.18 crores with 16.36 crores in the weekend and 7.82 crores on weekdays.

Then in the second weekend as well, Dharma Production’ hasn’t shown much growth and minted the amount of 1.02 crore on Friday & 1.47 crore on Saturday. On the next day i.e. Sunday, the film has managed to collect 1.65 crores and raised 10 days total collection to 28.32 crores nett.