Each time the legendary film maker Rajkumar Santoshi comes with a film, it is nothing less than a celebration. His long list of Iconic films over the last 30 years have earned him a place amongst finest visionaries of Indian & global cinema. As he releases the poster of his next iconic film in making “Bad Boy”, we see a work of outstanding artistry. 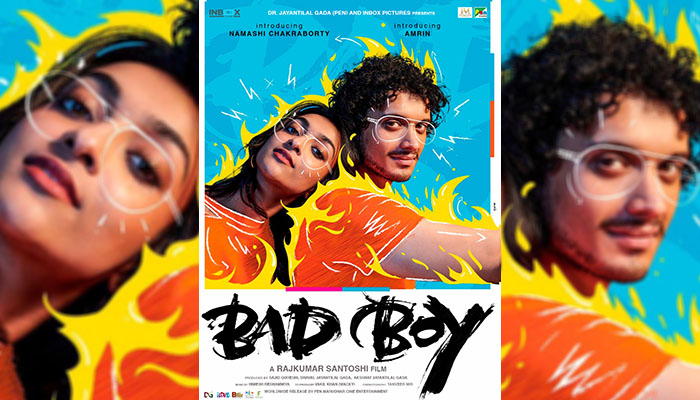 The makers call their film “the most complete commercial film in terms of enjoyment, fun & hoopla, a true Bollywood Masala entertainer of 2020”. As is the case with all Rajkumar Santoshi’s films, Bad Boy too is backed with a solid script, refreshingly new exciting cast, great music, unparalleled drama and of-course Rajkumar Santoshi’s matchless genius.

The “Bad Boy” poster features the exhilaratingly cool cast of dashing Namashi Chakraborty & charming Amrin Qureshi giving full bad boy & bad girl vibe ,the film is into post production stage with its shooting complete. By the looks of the poster, audience is in for nothing less than a mind blowing master piece with a trademark Rajkumar Santoshi’s colossal stamp on it.

To top it all, one of the biggest superstar of Bollywood & once the most sensational poster boy of Bollywood himself Salman Khan is introducing the dazzling poster duo of Namashi and Amrin. So, Bad Boy is approved, & out to make the next big Rajkumar Santoshi style mega splash in the film industry.

Calling it a “commercial film” Director of the film Rajkumar Santoshi says “Just like the poster, the story of Bad Boy is engaging and appealing. Drama, music, action, romance, these elements are the core of the film. Commercial cinema is one of the genres which audience enjoys and loves the most. We present to you our first poster featuring the lead star cast of the film Namashi Chakraborty & Amrin Qureshi”.

Producer of the film Sajid Qureshi says “This is our first official announcement of Bad Boy. We bring you the first poster of the film featuring the lead cast- Namashi Chakraborty & Amrin Qureshi. I don’t want to give much about the film as of now, I just want to say it will be one of the most massy entertainers of 2020 with the right amount of romance, comedy, action, music and drama. After all it’s a Rajkumar Santoshi film, I am confident about his work, its top notch”.

Lead actor Namashi Chakraborty says “Bad Boy is a dream come true for me. To be launched in an out and out commercial film, with the guidance of Sajid bhai and Raj ji, was an honour. I enjoyed every second of filming this lovely film”.

Lead actress Amrin Qureshi says “Bad boy is everything that I could have asked for. It’s a dream movie filled with entertainment and everything nice. Each and every moment was magic on set and I cannot wait for everyone to see it”.