After the decent opening week, anticipated Hindi biographical drama PM Narendra Modi has passed its second weekend as well on a steady note. From the critics as well as audience, it has received positive reactions. 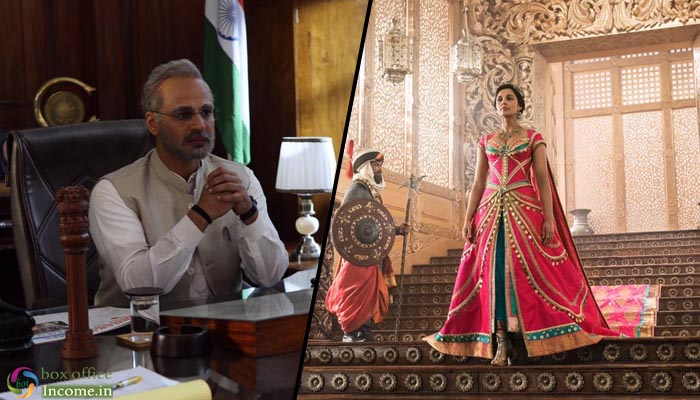 Due to clash with India’s Most Wanted & Hollywood biggie Aladdin, Omung Kumar’s directorial opened on an average note but picked up very well from the next day. In the opening week, it did the business of 19.21 crores that included 11.76 crores on weekend, 7.45 crores on weekdays.

On its 2nd Friday, Legend Global Studio & Anand Pandit Motion Pictures’s production showed growth and minted 1.15 crores. Over the weekend, once again it took a fair jump and bagged the amount of 1.50 crores on 2nd Saturday & 1.90 crores on 2nd Sunday. After 10 days, the total domestic collection of PM Narendra Modi has become 23.76 crores nett.

In parallel, the highly-awaited Hollywood film Aladdin has received positive reactions from the critics but still made the right buzz among the Indian audience. In the opening week, it raked the business of 31.05 crores which included 18.50 crores in the weekend and 12.55 crores on weekdays.

On 2nd Friday, after a minimal drop, Disney’s presentation minted the amount of 1.90 crores. Then over the weekend, it recorded a fair jump and garnered the business of 3.10 crores on 2nd Saturday & 3.60 crores on 2nd Sunday. After 10 days, the total collection of Aladdin has become 39.65 crores nett from Indian screens