After showing a fair jump over the second weekend, Hindi film Pati Patni Aur Woh is running steadily on weekdays despite having new releases Jumanji: The Next Level and Mardaani 2 in its parallel along with already existing Commando 3. The funfilled romantic comedy is getting a good response from the audience in north India. 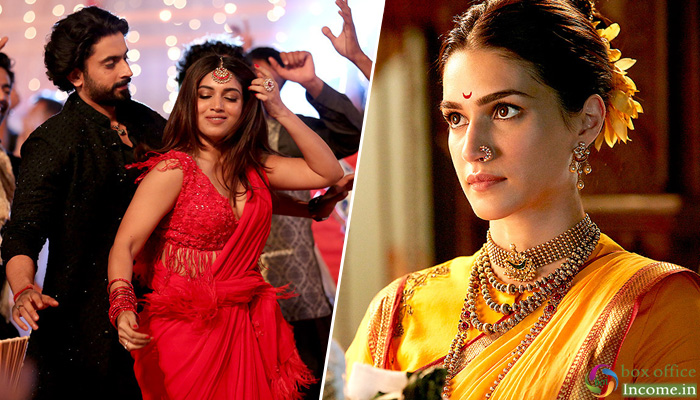 Directed by Mudassar Aziz, Kartik Aaryan, Bhumi Pednekar and Ananya Panday starrer Pati Patni Aur Woh has got succeed to entertain many in theatres and did the business of 55.97 crores with 35.94 crores in the weekend and 20.03 crores on weekdays. In the second weekend, it raked 13.45 crores with 3.05 crores on Friday, 4.88 crores on Saturday & 5.52 crores on Sunday.

T-Series’ production Pati Patni Aur Woh is once again running on weekdays and still has enough hold over the audience. On 2nd Monday, it minted the amount of 1.91 crores. At a similar note, it raked 1.88 crores on 2nd Tuesday and raised 12 days total collection to 73.21 crores nett.

On the other hand, Arjun Kapoor, Sanjay Dutt and Kriti Sanon starrer Panipat has gathered a positive word of mouth, but still, in the first week, it had remained underperformed and had raked the business of 25.68 crores with 17.68 crores in the weekend and 8 crores on weekdays.

Then in the second weekend, Ashutosh Gowaikar’s directorial epic war drama garnered 3.43 crores which included 0.69 crore on Friday, 1.26 crores on Saturday & 1.48 crores on Sunday. On 2nd Monday, it managed to collect 0.45 crore after a usual drop. With the little jump, Panipat minted 0.49 crore on 2nd Tuesday & raised its 12 days total domestic collection to 30.05 crores nett.