Neeraj Pandey’s upcoming thriller ‘Operation Romeo’ brings to screen the fresh pairing of promising new talents Sidhant Gupta and Vedika Pinto in the official Hindi adaptation of runaway Malayalam hit ‘Ishq: Not a Love Story’. The makers of the film unveil the trailer offering a glimpse into the chilling and gripping thriller that delves into the dark and intense, revenge drama. 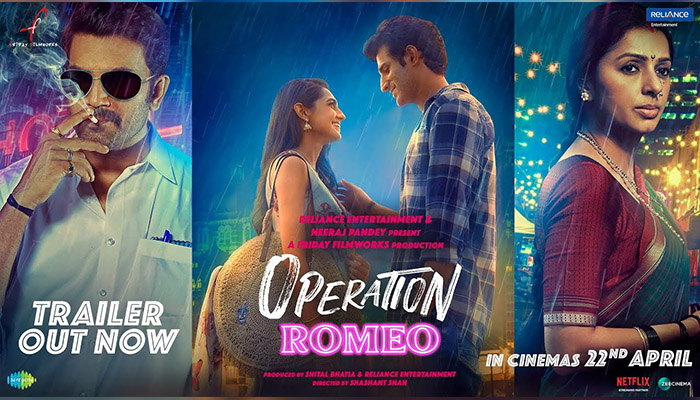 After putting up an impressive show as Imaad, the spinning bowler from Kashmir, in Inside Edge 3, Sidhant is all set to create an impact with his raw, earnest and convincing performance in Neeraj Pandey’s upcoming thriller ‘Operation Romeo’. The film also marks the debut of Vedika Pinto who creates waves with her much popular and loved act as the chirpy, carefree bride in Ritviz’s chartbuster music video ‘Liggi’.

Hailed for his remarkable presentations including ‘A Wednesday’ ‘Baby’, ‘Rustom’, ‘MS Dhoni: The Untold Story’, and the much appreciated recent success of ‘Special Ops’, Neeraj Pandey is known for his expertise in the thriller genre. Directed by Shashant Shah, ‘Operation Romeo’ is inspired by true events touching upon the moral policing young individuals face across the society.

The trailer begins with glimpses of an innocent, blooming love story of two young individuals, suddenly shifting gears into the daunting world of moral policing that grips the audience’s attention.

Having made a mark in Television earlier with the success of ‘Jashn-E-Ishq’, Sidhant Gupta expresses his thoughts about his upcoming thriller saying, “I felt a lot of compassion towards this character ever since I heard the story and that gave me courage to find his state of mind and live in it to an extent that Love felt pure and pain was hurtful while I was working. I’m grateful to Neeraj sir, Shashant sir, Friday films and reliance for this opportunity.”

Making her first on screen appearance, an excited Vedika Pinto shares, “My character Neha comes from a very conventional background. She’s shy, and coy, and comfortable within her own world but a series of unfortunate circumstances shake her ground and force her to reconcile with the perils of society. It was both exciting and challenging to play a role like that because I had close to nothing in common with my character and the film in itself is very intense and intricate. I feel blessed to make my debut in operation Romeo, the message at the core of this film is one that really resonates with me, it gave me an opportunity to really deep dive into the craft and also work with reputed names like Neeraj Pandey and Reliance entertainment.”

Produced by the filmmaker duo Neeraj Pandey and Shital Bhatia, ‘Operation Romeo’ is presented in collaboration with Reliance Entertainment and is scheduled to release in theaters on 22nd April, 2022.