This Friday, three new noticeable Hindi offerings are all set to release at the box office- One Day: Justice Delivered, Malaal & Hume Tumse Pyaar Kitna. All these are not gonna face any difficulty because of last week’s Article 15 but a couple of weeks back released smoothly-running Kabir Singh can hamper their run. 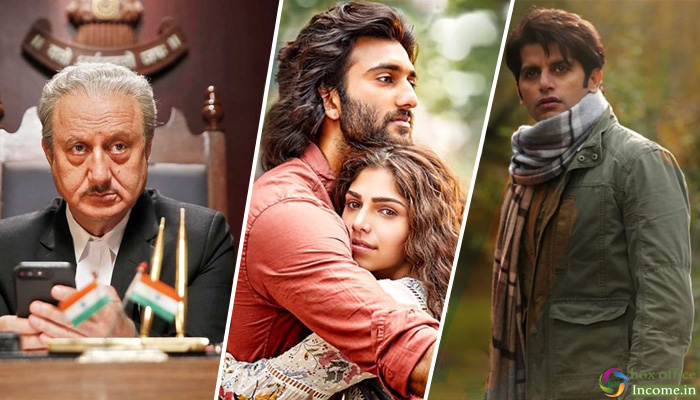 Directed by Ashok Nanda, action thriller One Day: Justice Delivered is based on the investigation and strategies followed by a crime branch special officer to solve the mystery of missing high profile persons. Starring Anupam Kher, Esha Gupta, Kumud Mishra and Anusmriti Sarkar.

With it’s trailer, One Day made good impact on viewers and also because of the presence of Bollywood’s one of the most talented actor Anupham, audience is looking more interested towards this actor oriented movie than adjacent ones. Considering the facts and figures, it is expected to open in range of 0.30-0.40 crores domestically.

On the other hand, newcomers Meezaan Jaffrey and Sharmin Segal starrer Malaal is a remake of the 2004 Tamil language film 7G Rainbow Colony. It’s a story of contemporary love story between Astha and Shiva (played by debutants Sharmin Segal and Meezaan Jaffrey), who are from contrasting backgrounds and live in a Mumbai chawl.

Mangesh Hadawale’s directorial Malaal has almost none buzz among audience due to weak promotions. It stars new comers Meezaan and Sharmin, so also doesn’t have any star power. With this, this offering seems to open in range of only 0.15-0.30 crore.

Last but not the least, Karanvir Bohra, Priya Banerjee and Sameer Kochar starrer Hume Tumse Pyaar Kitna has very low buzz but being a romantic thriller the movie can attract enough audience toward itself if critics react in favor. So far, it seems to open in range of 0.10-0.15 crore at domestic box office.