Audiences are all set to witness an 80s reunion as actors Sunny Deol, Sanjay Dutt, Mithun Chakraborty, and Jackie Shroff, are set to reunite for an action thriller. The actor who ruled the 80s and 90s Hindi cinema will be joining hands for a film titled, ‘Baap’. Today, the makers dropped the first look from the film. Sharing a picture of the four posing together in the looks from the film, Sanjay Dutt wrote, “#BaapOfAllFilms. Shoot dhamaal, dosti bemisaal”. 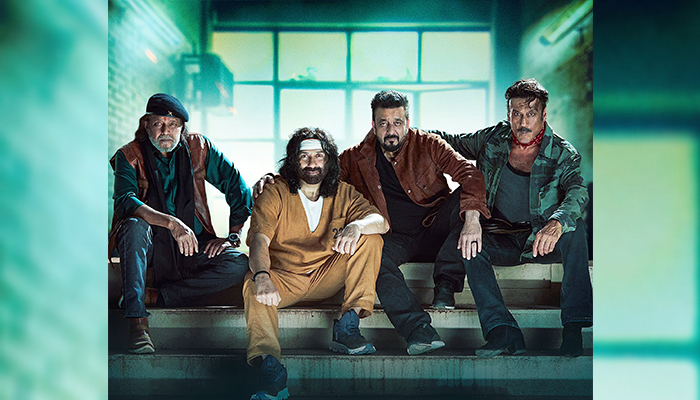 In the first look, all four are seen giving an intense look toward the camera. Mithun Chakraborty is seen wearing a scout’s cap with a sleeveless leather jacket, and a tilak on his forehead. While Sunny Deol is seen sporting long hair and is seen in an orange jail uniform. Sanjay Dutt and Jackie Shroff can be seen oozing swagger in their jacket over t-shirt look.

It will be directed by Vivek Chauhan who will be making his Bollywood directorial debut with this film. In the past, Vivek has previously worked as an assistant for shows and even films like Tanu Weds Manu Returns. The film will be produced by Ahmed Khan and Shaira Ahmed Khan in association with Zee Studios.

While it will be interesting to watch the four popular actors together on the big screen, the actors have done quite a bit or projects with each other in the past. Jackie Shroff and Sanjay Dutt featured together in one of the biggest blockbusters of their career, the Subhash Ghai film Khalnayak that featured Madhuri Dixit as the leading lady.