Almost 4 months after Kesari, superstar Akshay Kumar is back with his another film tilted Mission Mangal. Directed by Jagan Shakti, this history drama is inspired by the scientists at Indian Space Research Organisation who contributed to the Mars Orbiter Mission, India’s first interplanetary expedition. 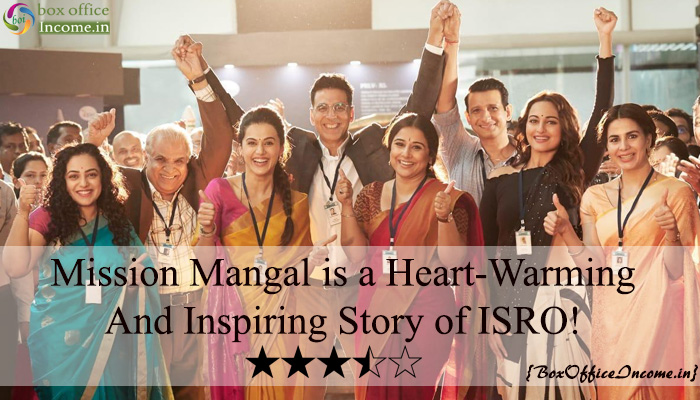 Plot:- Mission Mangal is the incredible true story behind India’s mission to Mars. The film begins in 2010. At the Indian Space Research Organisation (ISRO), a space mission under Rakesh Dhawan (Akshay Kumar) fails after Tara Shinde (Vidya Balan) in his team makes an error in judgement. What happens next forms the rest of the film.

Performance:- Talking about the acting, undoubtedly Akshay Kumar has given one of his best performances so far. He has played his character with complete dedication. The leading ladies Vidya Balan, Taapsee Pannu, Nithya Menen, Kirti Kulhari and Sonakshi Sinha all are good in their roles. While, Sharman Joshi is funny and would surely make viewers smile.

Direction:- The direction of Mission Mangal is done by Jagan Shakti and making a full-fledged film. Although the second half has all your attention, and the final climax is a nail-biting finish.

Music:- Music of the film is given by Amit Trivedi and it is good because of entertaining and catchy song ‘Dil Mein Mars Hai’. The screenplay is OK but editing could have been better definitely. But still, it’s a must-watch film, can be enjoyed with everyone.