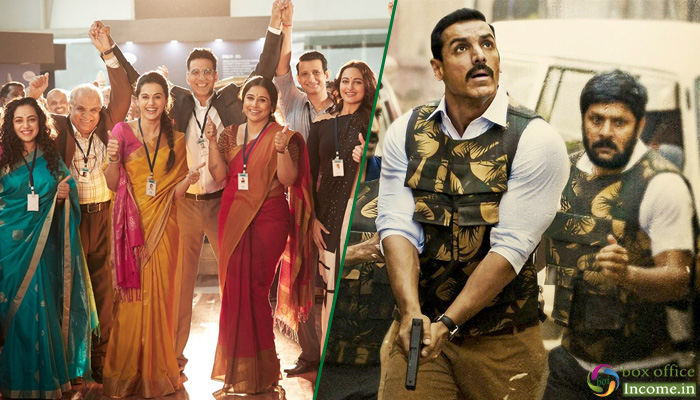 Interestingly, both movies are inspired by real-life incidents. While ‘Mission Mangal’ revolves around India’s space mission to Mars, ‘Batla House’ is based on the controversial Batla House encounter, which took place on September 19, 2008.

Akshay’s last movie Kesari which was released in March this year did the opening business of 21.06 crores, while his last Independence Day’s release Gold (2018) was opened at 25.25 crores. This time, his film is arriving on a holiday but not alone, so the expected opening for Mission Mangal is 26-27 crores.

The second Hindi offering which is daring to release opposite Mission Mangal is John Abraham & Mrunal Thakur starrer Batla House which also has a very high buzz among fans as well as the audience. Directed by Nikhil Advani, the film is a partly fictionalised tale, based on the real life Batla House encounter

John’s last movie was Romeo Akbar Walter that registered the opening business of 5 crores, while his last Independence Day’s release Satyameva Jayate (2018) was opened at 20.52 crores. Batla House seems capable to open in a range of 14-16 crores at the domestic box office.