Superstar Akshay Kumar’s Mission Mangal and John Abraham’s Batla House have completed their second week on a solid note after an excellent opening week. Comparisons of both the movies were being drawn, even before the releases. While Akshay and John are known to share a good friendly-bond and have even worked as co-actors on various projects. 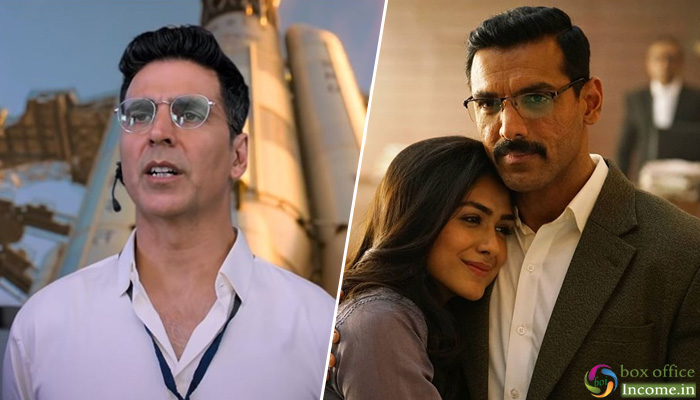 Directed by Jagan Shakti, the Hindi drama Mission Mangal has received mostly positive reviews from the critics as well as the audience and did the business of 128.16 crores in the extended 8-days opening week that included 97.56 crores of the weekend and 30.60 crores of weekdays.

Then in the second week, it dropped at a considerable rate and registered the business of 49.95 crores with 36.45 crores on the weekend and 13.50 crores on weekdays. Now the movie has entered in the 3rd weekend and collected the amount of 2.20 crore on 3rd Friday to take 17 days total collection to 180.31 crores nett.

On the other hand, Nikkhil Advani’s directorial Batla House has also got succeed to entertain the audience despite mixed critics reviews and did the business of 65.84 crores in the extented first week with 47.99 crores on the weekend and 17.85 crores on weekdays.

In the second week, it collected 25.92 crores that included 17.94 crores on the weekend and 7.98 crores on weekdays. Now it is in the 3rd weekend and managed to collect the amount of 0.73 crore on 3rd Friday and raised 17 days total collection to 92.49 crores nett.