Mission Mangal, starring Akshay Kumar as the leading man, has had a spectacular run at the box-office so far. Despite having the successfully running John Abraham’s Batla House in its parallel, Akshay Kumar starrer this semi-biopic drama has raked the business of more than 135 crores nett within 9 days of release domestically. 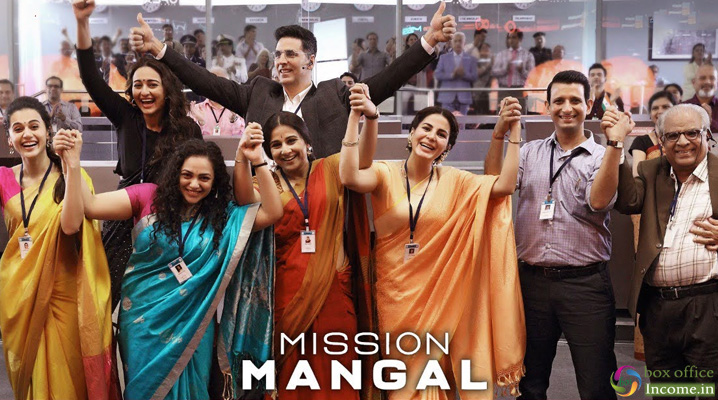 Superstar Akshay Kumar, Vidya Balan, Taapsee Pannu, Nithya Menen, Sonakshi Sinha and Sharman Joshi starrer much-awaited Mission Mangal has expectedly got succeed to impress everyone with its powerful storyline and a brilliant performance by the leading star cast. The film has received very positive reactions from the critics as well as the audience.

Due to a solid word of mouth, Mission Mangal remained strong throughout its extended weekend after an excellent start and did the business of 97.56 crores which included 29.16 crores on Thursday, 17.28 crores on Friday, 23.58 crores on Saturday & 27.54 crores on Sunday.

Then on weekdays, Jagan Shakti’s directorial wcitnessed a usual drop and managed to stand tall and minted the amount of 8.91 crores on Monday, 7.92 crores on Tuesday, 6.84 crores on Wednesday & 6.93 crores on 2nd Thursday. After the 8-days extended week, its total collection was recorded at 128.16 crores.

Remaining the first choice of viewers, Mission Mangal started its second weekend at a good note and bagged the amount of 7.83 crores (partial holiday of Janamasthami) on 2nd Friday. With this, its 9 days total collection has become 135.99 crores nett at the domestic box office.