Once again the Hollywood release is dominating the Bollywood offerings at the Indian box office, This Friday released, Sony’s fantasy adventure comedy film Jumanji: The Next Level Aladdin is leading over all the Hindi films from the very first day and expectedly registered a solid weekend. 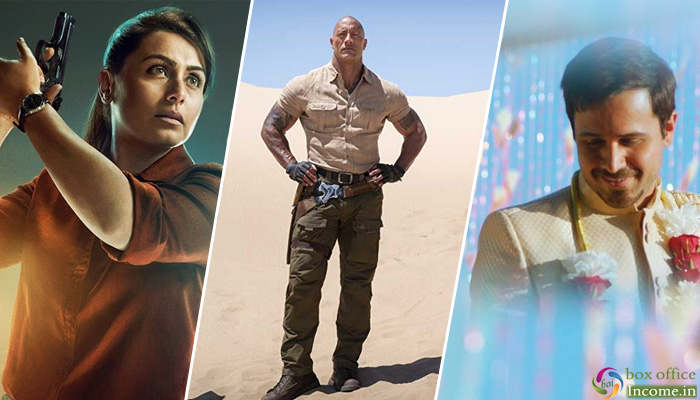 The live-action adaptation of 1995’s Jumanji, following 2017’s Jumanji: Welcome to the Jungle, Jake Kasdan’s directorial Jumanji 2 has got succeed to entertain all the Indian viewers and gathered a positive word of mouth. On Friday, it took a great start and did the business of 6.20 crores nett incl. Thu previews.

Over the weekend, Dwayne Johnson, Kevin Hart and Jack Black starrer showed a healthy jump in footfalls and bagged the amount of 8.35 crores on Saturday 10.10 crores on Sunday. After 3 days, the total collection of Jumanji: The Next Level has become 24.65 crores nett from Indian screens including all the versions.

In parallel, Rani Mukerji starrer Mardaani 2 has received positive reviews from critics as well as the audience but still, it has remained dull throughout. On Friday, it had raked the business of 3.80 crore, while collected 6.55 crore on Saturday. On Sunday, it has bagged 7.80 crore and raised 2 days total collection to 18.15 crores nett.

On the other hand, Emraan Hashmi, Rishi Kapoor and Vedhika Kumar starrer The Body has received mixed reviews from critics and running dull. It did the business of 0.50 crore on Friday and 0.75 crore on Saturday. On the next day i.e. Sunday, the film has scored 0.75 crore and raised 3 days total collection to 2 crores nett.