After a fair opening week, Hindi suspense thriller Mohit Suri’s directorial Malang has passed its second weekend at a decent note. With mixed reviews, it did the business of 39.65 crores in the first week that included 25.36 crores in the weekend and 14.29 crores on weekdays. 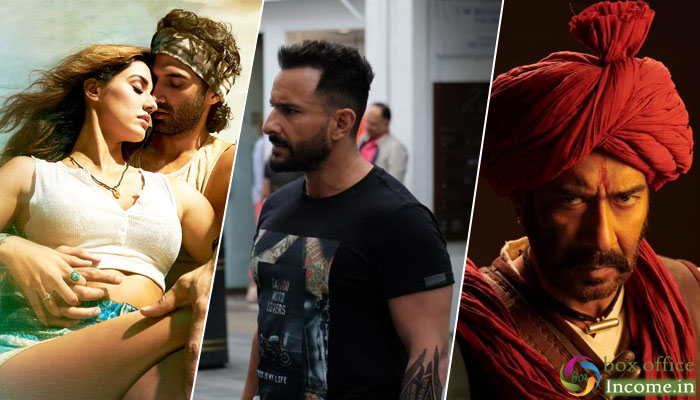 Aditya Roy Kapur, Disha Patani, Anil Kapoor and Kunal Kemmu starrer has now entered in the second week and started the weekend at a steady note by collecting 2.25 crores on 2nd Friday. Then Malang showed decent growth and minted the amount of 2.52 crores on 2nd Saturday & 3.25 crores on 2nd Sunday. After 10 days, its total collection has become 47.67 crores nett.

On the other hand, a couple of weeks back released Pooja Entertainment’s presentation Jawaani Jaaneman had passed its last two weeks at a steady note and did the business of 26.98 crores with 20.21 crores in the first & 6.66 crores in the second week. Now it is running in the third week and once again passed the weekend at a steady note.

On 3rd Friday, Nitin Kakkar’s directorial had faced a drop and minted 0.28 crores. Over the third weekend, it showed a little jump and bagged the amount of 0.33 crores on Saturday & 0.43 crores on Sunday. After 17 days, the total of Jawaani Jaaneman has become 27.91 crores.

While, Tanhaji has won many hearts across the country. With a solid word of mouth, the film started its 6th weekend on a decent note and did the business of 0.63 crore on Friday. On Saturday, it witnessed a good jump and bagged the amount of 0.97 crores.

On the next day i.e. Sunday, Ajay Devgn starrer recorded a further growth and minted the amount of 1.40 crores. With this, the 38 days total domestic collection of the film has become 272.93 crores including the business of 269.93 crores from the last 5 weeks.