Here’s the BIG NEWS! Katrina Kaif, Ishaan Khatter and Siddhant Chaturvedi have teamed up for a horror-comedy, titled Phone Bhoot that will be directed by Gurmmeet Singh and produced by Farhan Akhtar and Ritesh Sidhwani under their banner Excel Entertainment. 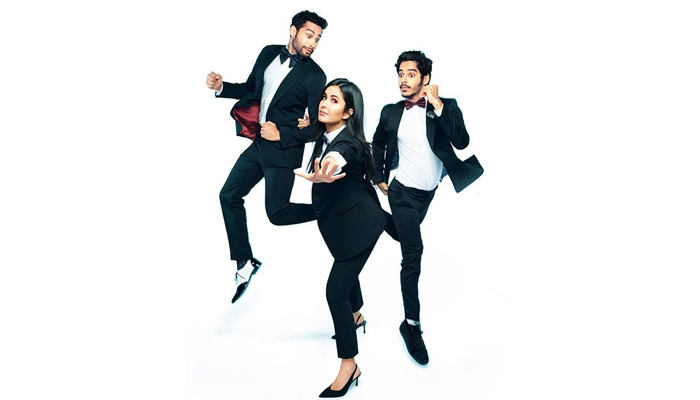 The horror-comedy film bring Katrina Kaif, Siddhant Chaturvedi and Ishaan Khatter together for the first time and it will be interesting to watch them on big screen. Excel took to social media and announced that the film will be in cinemas from 2021, “Darna allowed hai, as long as you’re laughing along the way. #PhoneBhoot, ringing in cinemas near you in 2021.”

Katrina Kaif wrote: “The one stop shop for all bhoot related problems, Phone Bhoot ringing in cinemas in 2021.” Dressed in a black tux in the photoshoot, all three of them are making funny faces. ‘Phone Bhoot’ is Excel’s yet another major film announcement after Gully Boy and their upcoming boxing film Toofan, featuring Farhan Akhtar in the titular role.

This is the first time the three actors will work with each other. While Katrina Kaif has done two films with Excel Entertainment – Zindagi Na Milegi Dobara and Baar Baar Dekho, this is the third project of Siddhant Chaturvedi after Inside Edge and Gully Boy.