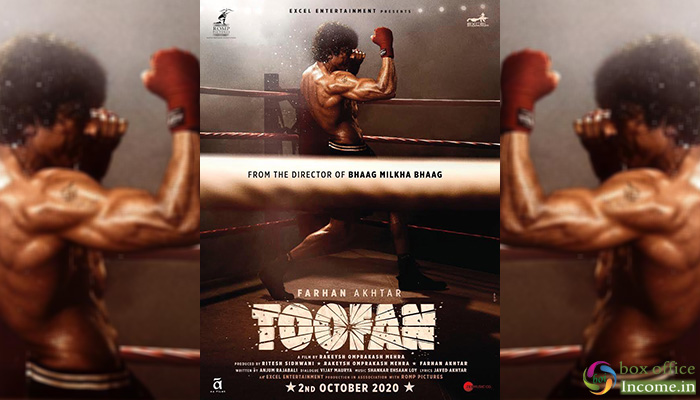 In the first look, the still shows Farhan sweating it out in a boxing ring, practicing air punches with his ripped physique on display. The actor, who has undergone a body transformation for the film and it’s pretty visible. If the scripting process goes well, this could be a huge surprise.

The film features Akhtar, Paresh Rawal and Isha Talwar in leading roles. It tells the story of a boxer, played by Akhtar, who does hard work for winning a boxing match. Rawal plays the role of Akhtar’s coach.

Farhan Akhtar shared the first look of his upcoming boxing-drama Toofan on Twitter and posted, Toofan Uthega!! FIRST LOOK! “#TOOFAN releasing 2nd October 2020!!” Also, it’s clashing with John Abraham’s Satyameva Jayate 2 and Vicky Kaushal’s Sardar Udham Singh Biopic on Gandhi Jayanti next year so it’ll be interesting to see what will be the result of this clash.

Farhan has joined hands with Mehra after six years for Toofan and will be seen playing a boxer. The two last collaborated together for Bhaag Milkha Bhaag, a biopic on the legendary athlete Milkha Singh. The film is jointly produced by Excel Movies and ROMP Pictures.