Kartik Aaryan is teaming up with Neerja Director, Ram Madhvani for the first time on a thriller, titled Dhamaka. The film, which will be produced by Ronnie Screwvala’s RSVP and Ram Madhvani Films with Co-Producer Amita Madhvani. 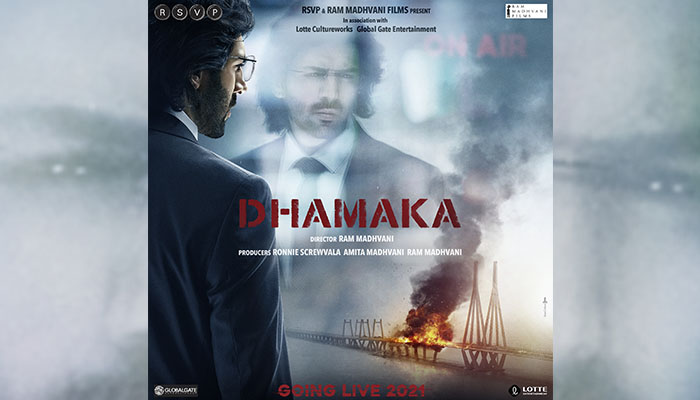 Today, on his birthday, Kartik Aaryan shared the first look of his film and announced the title Dhamaka. In the first look, the actor is seen sporting long hair, dressed in a suit, looking outside the window as the bridge is burning. “Aaj mera Birthday hai #DHAMAKA hona chahiye,” he captioned the motion poster.

Based completely in Mumbai, the film will be produced by Ronnie Screwvala’s RSVP and Ram Madhvani Films (with Co-Producer Amita Madhvani). Ronnie shares, “I am thrilled to collaborate with Ram and Kartik and nothing better than this particular subject for us to come together for the first time. When Ram came to me with the script, I knew that I couldn’t miss out on this one, and we got a similar reaction when we narrated the script to Kartik as well.”

Kartik Aaryan is excited to step into the thriller zone and team up with Ram Madhvani to play a journalist who covers the live broadcast of a terror attack in Mumbai. “This for me is a miracle script and had me on the edge of my seat all through the narration. I knew this is the script that would give me the opportunity to explore a different side of me as an actor. I can’t wait to transport myself to Ram sir’s world and see his vision translate on the big screen. This is also the first time I am collaborating with Ronnie and RSVP, and I am looking forward to this journey” says Kartik Aaryan.

After Neerja and his successful digital show, Aarya, Ram was on the lookout for a story that lives up to the expectations of the audience. “As a director, I am inclined towards human stories. Though this one is a thriller on the outset, there lies a lot of emotion and drama in the screenplay that leads to the adrenaline rush. This film demanded a young actor, with a certain amount of rawness in the space. Kartik, being one of the most talented actors in Bollywood, fits the bill.”

He concludes by admitting that shooting in the midst of Covid will be challenging. “But I have a terrific backing from my producer, Ronnie Screwvala, and our production teams at RSVP and RMF, are all well versed with the covid protocols. As a director/ Producer I will be abiding by the rules as laid down by the government and am eager to get back to filming .”

The Terror Live revolved around popular news journalist Yoon Young-Hwa but due to an unsavory incident works now as a radio show host. One day, a listener calls in to the radio program and states that “I will blow up the Mapodaegyo Bridge.” At first, the call is taken as a joke, but soon they realize it is real. The incident is then broadcast live on TV for the next 90 minutes. Yoon Young-Hwa believes this incident is his chance to get back to become a news journalist again.