After a fair opening weekend, Kagana Rananut & Rajkummar Rao starrer Judgementall Hai Kya has entered on weekdays on a steady note. Despite having Super 30, The Lion King and Arjun Patiala in its parallel, this suspense drama is showing good performance at the box office across India. 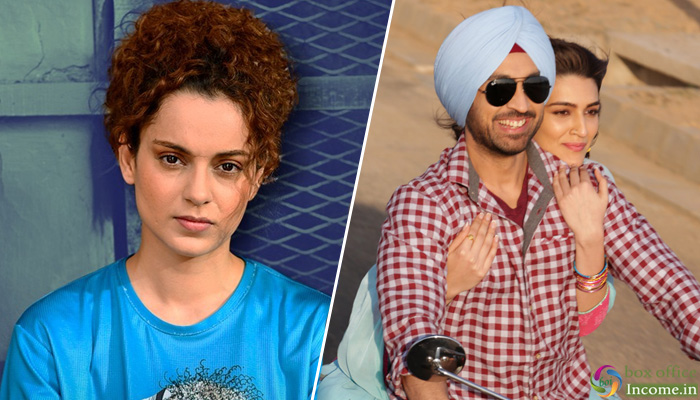 Directed by Prakash Kovelamudi, Judgementall Hai Kya has received mixed reviews from the critics but got succeed to satisfy the audience. On Friday, it opened decently with an occupancy of 15-20% and did the business of 5.40 crores. Then on Saturday, Maddock Films’ production took a healthy growth and registered the business of 8.02 crores.

On the next day i.e. Sunday, the movie reported little jump and minted the amount of 8.62 crores. After a weekend, its total collection was recorded at 22.04 crores. On Monday, it got dropped by 52% than Friday and minted the amount of 2.60 crores.With this, its total collection after 4 days has become 24.64 crores nett at the domestic box office.

On the other hand, Diljit Dosanjh, Kriti Sanon and Varun Sharma starrer Arjun Patiala has got failed to entertain the critics as well as the audience and remained low in the opening weekend. It did the business of 1.30 crores on Friday, 1.80 crores on Saturday, and 2.10 crores on Sunday.

On Monday, after a considerable drop in footfalls, Rohit Jugraj’s directorial Arjun Patiala bagged the amount of 0.60 crores and raised its 4 days total collection to 5.80 crores nett. The film is a character-driven comedy with Sanon playing a crime journalist and Dosanjh playing a quirky, small town cop.