Kangana Ranaut & Rajkummar Rao starrer suspese thriller Judgementall Hai Kya is doing very well at the box office since its release despite having much-buzzed Arjun Patiala in the opposite. After a fair opening weekend, it is heading decently on weekdays as well. 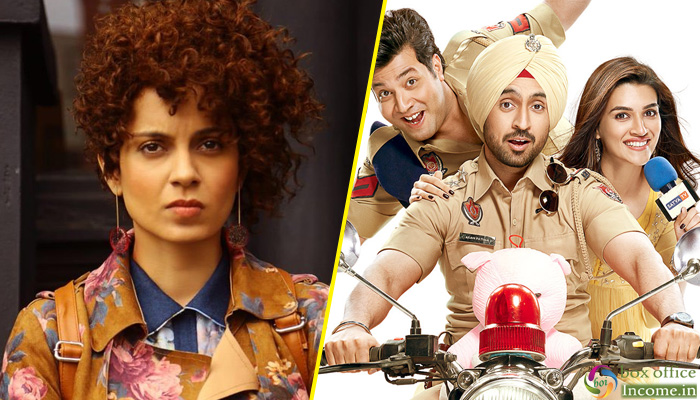 Produced by Balaji Telefilms and Karma Media and Entertainment, Judgementall Hai Kya has received mixed reviews from the critics but it got succeed to make the audience laugh. In the opening weekend, it did the business of 22.04 crores, with 5.04 crores on Friday, 8.02 crores on Saturday & 8.62 crores on Sunday.

On weekdays, it faced a usual drop in footfalls but still managing to stay steady. On 2nd Monday, with a fall of 52% than Friday, the movie minted the amount of 2.60 crores. Then on 2nd Tuesday, gets similar response and it raked the business of 2.62 crores.

On the next day i.e. Wednesday, Judgementall Hai Kya collected the amount of 2.26 crores and raised the 6 days total collection to 29.52 nett at the domestic box office. As per the current trend, it seems to go past 31 crores by the end of this week.

On the other hand, director Rohit Jugraj’s comedy drama Arjun Patiala is struggling to divert the audience toward itself since the release. In the opening weekend, it did the business of 5.20 crores that included 1.30 crore on Friday, 1.80 crore on Saturday & 2.10 crores on Sunday.

Now on weekdays, with a usual drop, Diljit-Kriti-Varun starrer Arjun Patiala minted the amount of 0.60 crore on Monday and 0.50 crore on Tuesday. On the next day i.e. Wednesday, it managed to collect 0.35 crore and raised 6 days total to 6.65 crores.