This Friday released the suspense Hindi movie Judgementall Hai Kya has registered a decent opening weekend despite a slow start and now showing a steady performance on weekdays as well. It has received mixed reviews from the critics though but got succeed to make the audience laugh. 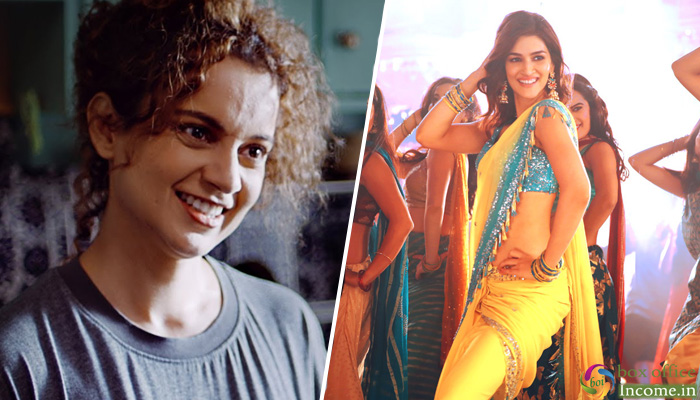 Everyone appreciated the performances given by leading actors Kangana Ranaut and Rajukummar Rao but still the film is lagging behind adjacent released Super 30, The Lion King and Arjun Patiala. Because of clash, it opened to a slow note on Friday but picked up well over the weekend due to mixed word of mouth.

In the opening weekend, Judgementall Hai Kya did the business of 22.04 crores, that included 5.40 crores of Friday, 8.02 crores of Saturday and 8.62 crores of Sunday. In weekdays, asusual the film witnessed abrupt drop in footfalls but still heading steadily and has enough hold over the multiplex audience.

On Monday, Judgementall Hai Kya faced around 52% of drop than Friday and minted the amount of 2.60 crores. On the next day i.e. Tuesday with little growth, it raked the business of 2.62 crores and raised it’s 5 days total collection to 27.26 crores at domestic box office.

On the other hand, Diljit Dosanjh, Kriti Sanon and Varun Sharma starrer cop-comedy drama Arjun Patiala has got failed to entertain the audience and receiving a cold response. With a low note over the weekend, it has registered the business of 5.20 crores that included 1.30 crore on Friday, 1.80 crore on Saturday, and 2.10 crores on Sunday.

On weekdays, as usual, Rohit Jugraj’s directorial witnessed a drop and minted the amount of 0.60 crore on Monday. Then on Tuesday, with a further drop, it raked the business of 0.50 crore and raised its 5 days total collection to 6.30 crores nett at the domestic box office.