Since its release, the hugely-awaited Housefull 4 is performing strongly at the box office. Housefull 4 was released on October 25, along two mid range films- Taapsee Pannu and Bhumi Pednekar starrer Saand Ki Aankh and Rajkummar Rao’s Made in China. Both the films have given average performance at the box office. 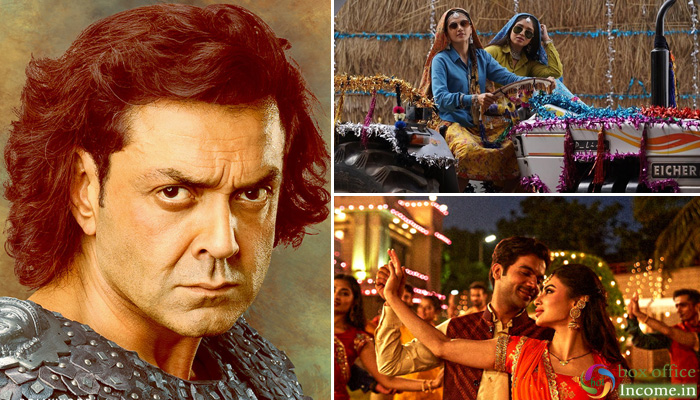 Due to a mixed word of mouth, it remained under-performed throughout the weekend and registered the business of 53.22 crores with 19.08 crores on Friday, 18.81 crores on Saturday & 15.33 crores on Sunday. On Monday, Farhad Samji’s directorial recorded a healthy growth due to national holiday and raked the business of 34.56 crores.

While on Tuesday, due to the Bhai Dooj holiday, it witnessed normal drop and minted the amount of 24.04 crores. With the business of 16.35 crores on Wednesday, the Hindi comedy drama has raised its 6 days total collection to 128.17 crores. Produced by Sajid Nadiadwala under Nadiadwala Grandson Entertainment.

On the other hand, Tushar Hiranandani’s directorial, sports drama Saand Ki Aankh registered the business of 2.47 crores in the weekend with mixed reviews. On weekdays, it minted 3.19 crore on Monday, 2.85 crore on Tuesday & 1.63 crore on Wednesday. After 6 days, its total collection has become 10.14 crores.

While Rajkummar Rao and Mouni Roy’s comedy-drama Made In China has remained slow at the box office, collected only 3.75 crores in the weekend. On weekdays, it raked the business of 3 crore on Monday, 1.75 crore on Tuesday & 1.10 crore on Wednesday to take its 6 days total collection to 9.60 crores nett.