The highly-anticipated offering of superstar Akshay Kumar, Housefull 4 is getting solid support of fans. Although, Diwali holiday showed good growth in the business and made it cross over 100 crores at the domestic box office within 5 days. 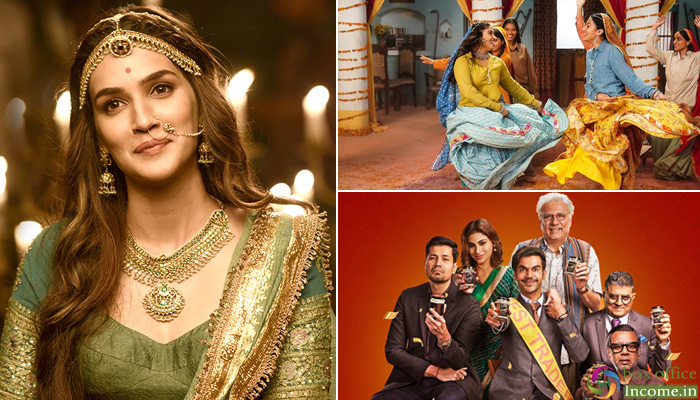 Fox Star Studios and Nadiadwala Grandson Entertainment’ production took a good start but got failed to take expected growth over the weekend and registered the business of 53.22 crores with 19.08 crores on Friday, 18.81 crores on Saturday & 15.33 crores on Sunday.

Now, Housefull 4 is running on weekdays and still flying high at the box office. On Monday due to national holiday, it remained higher than Friday and raked the business of 34.56 crores. On the next day i.e. Tuesday, it witnessed a normal drop and minted the amount of 24.04 crores. With this, the total collection of Housefull 4 after 5 days has become 111.82 crores nett.

On the other hand, Bhumi Pednekar & Taapsee Pannu starrer Saand Ki Aankh has also received mixed reviews from the critics as well as the audience. In the opening weekend, it raked the business of 2.47 crores, that included 0.48 crore of Friday, 1.08 crore of Saturday and 0.91 crores of Sunday.

On Monday, Tushar Hiranandani’s directorial takes a growth due to holiday and collected 3.19 crore. Then on Tuesday, Saand Ki Aankh registered the business of 2.85 crore and raised its 5 days domestic total to 8.51 crores.

On the other hand, Maddock Films’ production Made In China has also received mixed feedback and got failed to compete with adjacent releases and did the business of only 3.75 crores (Fri 1 cr, Sat 1.50 cr, Sun 1.25 cr) in the opening weekend. On Monday, it has also taken a jump and minted 3 crores. While on Tuesday, it bagged 1.75 crore and raised 5 days total to 8.50 crores.