Housefull 4 starring Akshay Kumar, Kriti Sanon, Riteish Deshmukh amongst others in lead, released last Friday and has been maintaining its hold ever since. The movie has suffered the Diwali effect to a high extent with the footfalls remaining low at the ticket windows, but despite that, the numbers have been appreciable! 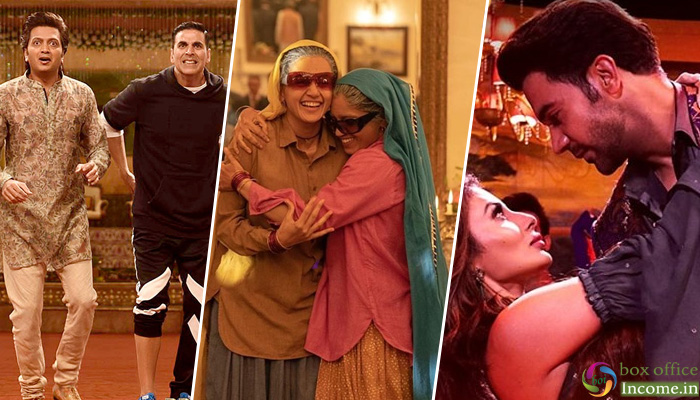 Directed by Farhad Samji, Housefull 4 has got failed to live up to its humongous expectations and received mixed reviews. From the audience as well, the movie is getting a mixed response. On Friday, it opened on a decent note but witnessed a fair jump in footfalls from evening shows and minted the amount of 19.08 crores.

On Saturday, Housefull 4 expectedly took noticeable drop and had minted 18.81 crores. On the next day i.e. Sunday, with a further jump, Fox Star Studios and Nadiawala Grandson Entertainment’s production has bagged the amount of 15.33 crores and raised 3 days total domestic collection to 53.22 crores nett.

In parallel, Bhumi Pednekar & Taapsee Pannu starrer Saand Ki Aankh is struggling at the box office. On Friday, the Hindi sports-drama did the business of 0.48 crore, while on Saturday, it has bagged 1.08 crore. On Sunday, it has bagged 0.91 crore and raised 2 days total collection to 2.47 crores nett.

On the other hand, Rajkummar Rao and Mouni Roy starrer comedy-drama Made In China has unfortunately got failed to convince critics and received mostly negative reviews. From the audience also, it is getting a mixed reaction. This is why it was opened at a poor note and raked the opening business of only 1 crore.

Due to the mixed word of mouth, Maddock Films’ production didn’t witness the required growth over the weekend and collected 1.50 crores on Saturday & 1.25 crores on Sunday. After 3 days, its total collection has become 3.75 crores nett at the domestic box office.