The fourth installment of Housefull franchise, with a new story has finally hit the screens on Friday amid good expectations of moviegoers. Unexpectedly, Housefull 4 has received mixed reviews from the critics but still managed to open at a good note across the country. 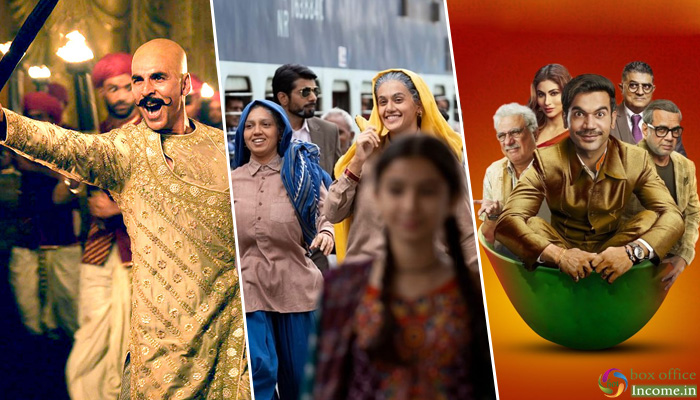 Directed by Farhad Samji, the new installment stars Akshay Kumar, Riteish Deshmukh, Bobby Deol, Kriti Sanon, Pooja Hegde and Kriti Kharbanda in lead roles. It got released with 3 other notable films. The first two being Bollywood in Saand Ki Aankh and Made In China and the third is Thalapathy Vijay’s Bigil.

Most critics are not convinced with the storyline of Housefull 4 and rated it low. On Friday, the film opened at an average note with an occupancy of around 20% in the morning. Despite mixed reactions, it recorded a fair jump post noon shows and registered the opening business of 19.08 crores nett from 3900 screens.

On the other hand, Bhumi-Taapsee starrer Saand Ki Aankh took a slow start with around 7% of occupancy in the morning. Over the evening & night shows, it witnessed a decent growth in multiplexes and minted the amount of 0.48 crores nett at the domestic box office.

While the third Hindi release of this week, Made In China started its journey on a poor note and remained overall dull throughout the day as Housefull 4 is diverting major audience toward itself. As per reports, Rajkummar Rao and Mouni Roy starrer has collected only 1.25 crore on Friday, but expected to grow well over the weekend.