Superstar Akshay Kumar starrer much-anticipated Housefull 4 has passed its third week at a good note despite having the new release Bala in the opposite. While Bhumi Pednekar and Taapsee Pannu starrer Saand Ki Aankh has shown an ordinary performance throughout the week. 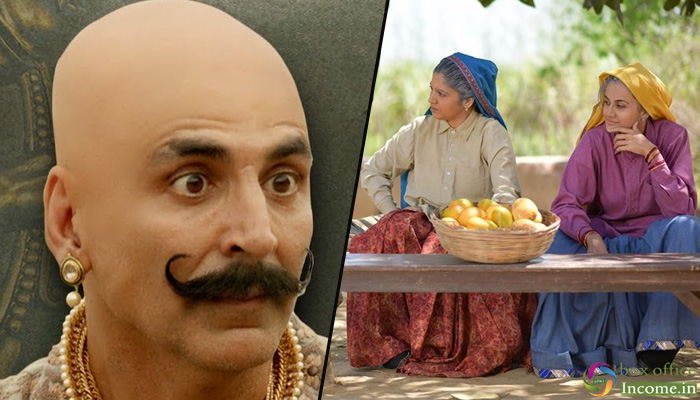 Directed by Farhad Samji, the Hindi comedy drama Housefull 4 had registered a fantastic business of 141.31 crores in the first week and 48.42 crores in the second. In the third weekend as well, it had remained almost steady and raked 9.10 crores with 1.95 crores on Friday, 2.80 crores on Saturday & 4.35 crores on Sunday.

Then on weekdays, Fox Star Studios’ presentation had recorded a usual drop but still remained steady and minted the amount of 1.75 crores on 3rd Monday, 2.20 crores on 3rd Tuesday & 1.20 crore on 3rd Wednesday. On the next day i.e. 4th Thursday, the film has bagged 1.20 crore and raised 3 weeks total collection to 205.18  crores nett.

On the other hand, Tushar Hiranandani’s directorial biographical drama Saand Ki Aankh had garnered the business of 11.68 crores in the first week and 8.37 crores in the second. In the third weekend, after a slowdown, it had managed to collect 1.50 crores with 0.27 crore on Friday, 0.51 crore on Saturday & 0.72 crores on Sunday.

Then on weekdays, Reliance Entertainment and Chalk and Cheese Films had witnessed a usual drop and minted 0.24 crore on 3rd Monday, 0.38 crore on 3rd Tuesday & 0.22 crore on 3rd Wednesday. With further dip, it has collected 0.27 crore on 4th Thursday and raised 22 days total collection to 22.66 crores nett.