Within just 9 days of release, superstar Akshay Kumar’s latest offering Housefull 4 has become the sixth highest grosser movie of the year so far by surpassing the lifetime domestic collection of his’s Kesari. Despite mixed reviews of critics, the latest one is heading amazingly well on box office. 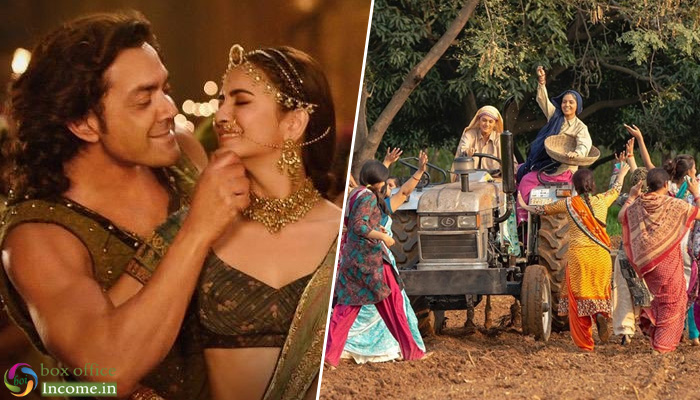 In the opening week, Akshay Kumar, Riteish Deshmukh, Bobby Deol, Kriti Sanon, Kriti Kharbanda and Pooja Hegde starrer Housefull 4 showed fabulous performance through out and minted the amount of 141.31 crores which included 53.22 crores in the weekend and 88.09 crores on weekdays.

On Friday, Housefull 4 faced considerable drop in its business graph as compare to Thursday and did the business of 8.05 crores. On the next day being Saturday, the movie started the day on almost similar note but witnessed good growth in its occupancy from evening shows and added the amount of 10.10 crores to its account.

After the 9 days of release, total collection of Nadiadwala Grandson Entertainment’s production Housefull 4 is recorded as 159.46 crores on domestic box office. Housefull 4 was released on October 25, alongside two mid-range Hindi films — Tushar Hiranandani’s Saan Ki Aanakh and Mikhil Musale’s Made In China.

On the other hand, last week released Bhumi Pednekar and Taapsee Pannu starrer Saand Ki Aankh was started its journey at a dull note due to mixed reactions and did the business of 11.68 crores in the first week with 2.47 crores in the weekend and 9.21 crores on weekdays.

Tushar Hiranandani’s directorial biographical drama is now running in the second week and minted the amount of 1.28 crore on its 2nd Friday. On 2nd Saturday, with a little jump, it managed to collect 1.89 crores and raised 9 days total domestic collection to 14.85 crores nett.