The fourth installment of India’s most successful comedy franchise Housefull has already completed its 2 weeks journey on box office very excellently. Being Akshay Kumar starrer the movie has been released with huge buzz among audience and witnessed amazing craze in theaters. It has not received much positive reviews from critics but still the results are fantastic. 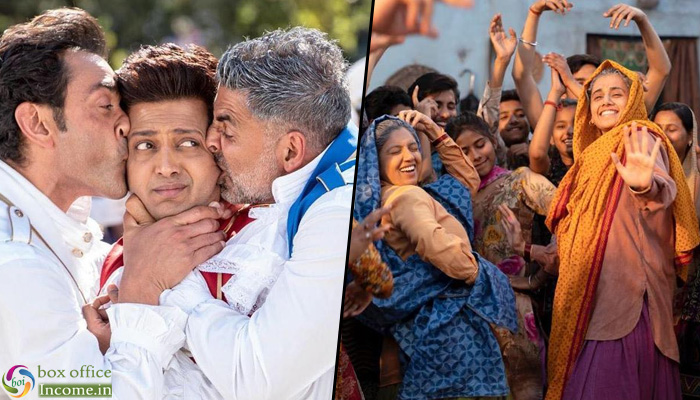 Now the movie is running in its third week and gets lesser response in the weekend due to new release Bala. On its 3rd Friday, it faced decent drop and collected the amount of 1.95 crore. Then on Saturday, being weekend it received slight rise in its business graph and minted the amount of 2.80 crore.

On the last day of weekend i.e. Sunday, being holiday it witnessed higher response than last 2 days and raked the amount of 4.35 crore from Indian screens. With this, Farhad Samji’ directorial Housefull 4 has become 198.83 crores at the domestic box office.

On the other hand, Taapsee Pannu and Bhumi Pednekar starrer Saand Ki Aankh has gathered a good word of mouth and did the business of 11.68 crores in the first and 8.37 crores in the second week. The film is now running in the third week and had started the weekend at a steady note.

On 3rd Friday, Tushar Hiranandani’s directorial had raked the business of 0.27 crores after a slight decline. Then it had witnessed a noticeable jump in footfalls and minted 0.51 crores on 3rd Saturday. On the next day i.e. 3rd Sunday, the film has managed to collect 0.72 crores and raised 17 days total collection to 21.55 crores nett.