With excellent performance through out till its second weekend, laughter riot Housefull 4 has come closer to the mark of 200 crores. Soon it will become the second movie of the year and superstar Akshay Kumar to enter in this club after Mission Mangal. 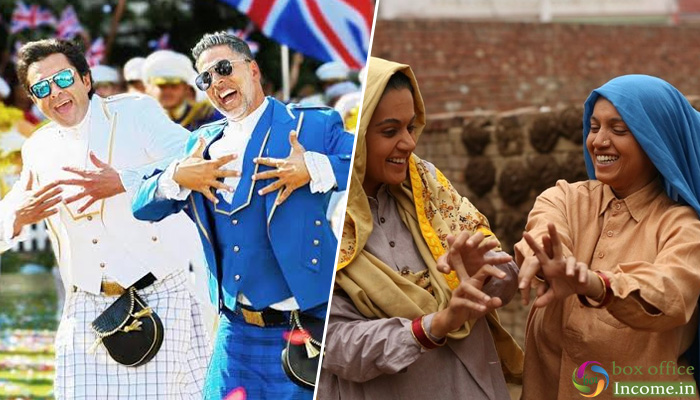 In its first week, Farhad Samji’s directorial this comedy drama showed amazing performance and registered the record of sixth highest opening week collection with 141.31 crores on domestic box office, that includes 53.22 crores of weekend and 88.09 crores of weekdays.

Now the movie is running in its second week and already passed its second weekend trial on a good note. This fourth installment of India’s most successful comedy franchise Housefull, did the business of 8.05 crores on its 2nd Friday. Then it took a decent jump in mass centres and minted 10.10 crores on Saturday and 13.12 crores on Sunday.

On the 2nd Monday, it faced usual drop but remained strong and added the amount of 5.45 crores to its account. After the journey of 11 days, total collection of Housefull 4 has become 178.03 crores on Indian box office.

On the other hand, Taapsee Pannu and Bhumi Pednekar starrer Saand Ki Aankh which had remained under-performed in the first week despite mixed reviews and did the business of 11.68 crores with 2.47 crores in the weekend and 9.21 crores on weekdays.

In the second weekend, Tushar Hiranandani’s directorial has not only performed better than new releases. It minted the amount of 5.49 crores in this weekend with 1.28 crore on Friday, 1.89 crores on Saturday and 2.32 crores on Sunday. On 2nd Monday, the film has managed to collect 0.80 crore and raised 11 days total collection to 17.97 crores nett.