A few days after releasing a gritty teaser with Tiger Shroff‘s silhouette against a dystopian setting, Pooja Entertainment & Good Co. have unveiled the intriguing poster of their forthcoming action thriller Ganapath. The poster features the film’s star Tiger in a grungy, raw avatar, oozing his trademark charisma against a blurred cityscape hemmed in with barbed wire, while a cloud of smoke lingers in the air. 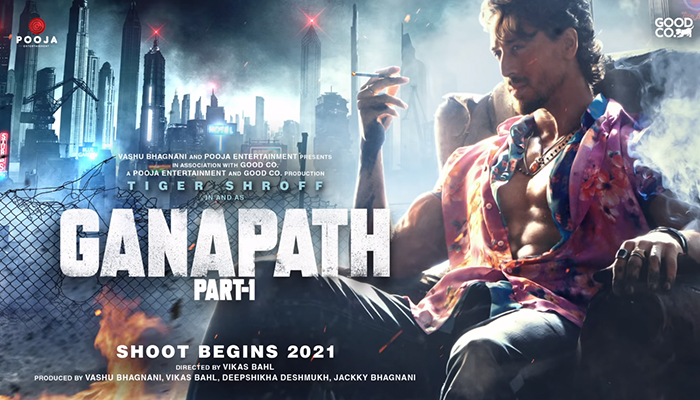 The makers have hinted at an action-packed, multi-part film franchise that will match and rival the standards set by Hollywood’s genre-defining action movies. Which means, Tiger Shroff is going to win all hearts yet again with his amazing action.

Set in a post-pandemic, dystopian era, it will portray a never-seen-before world and is Pooja Entertainment’s first out-and-out action film, co-produced with Good Co., with the new age action king of Bollywood Tiger Shroff. He seems to be Jean-Claude Van Damme, Arnold Schwarzenegger and Sylvester Stallone, rolled into one. This film, we are told, is a universe apart from the Tiger’s earlier films and will present him in a completely different mould.

Director Vikas Bahl who will be collaborating with Tiger Shroff for the first time says, “I am looking forward to working with one of the best action stars the audience has seen. I believe this film will truly tap into a Tiger nobody has ever seen before!”