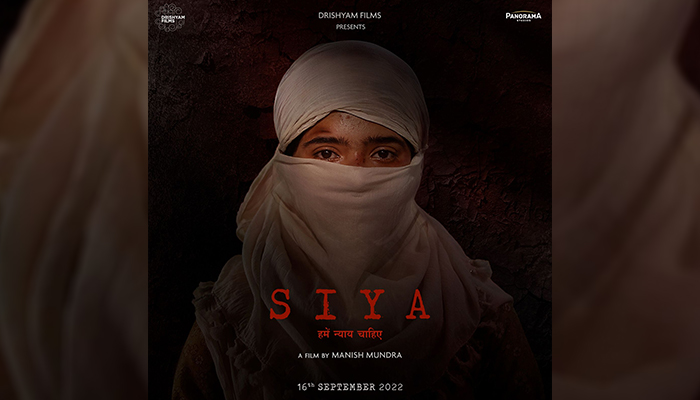 Now Drishyam Films is all set to bring to the audiences another hard-hitting human story of India, SIYA. Starring breakthrough talents like Pooja Pandey and Vineet Kumar Singh, the film tells the tale of a small-town girl who despite all hurdles, decides to fight the oppressive patriarchy and takes off on a quest for justice.

Directed by corporate bigwig turned producer Manish Mundra, the makers of SIYA have launched the first-look poster of the film. Reflecting the cocktail of emotions a victim undergoes from fear, anger, pain and helplessness, the poster of SIYA is a reflection of the hard-hitting, gritty drama that’s guaranteed to generate social conversations.

Says director Manish Mundra, “SIYA sheds light on the hypocrisy behind the crimes countless women endure. The numbers of these crimes are staggering and only seem to be growing with every passing day. We hope to empower women to stand up and speak out with this film. Drishyam Films has always backed cinema that has a notable talking point and sends a message to film goers and SIYA too will follow suit. We hope that the audience will understand the relevance of our film and will speak out on the same.”

Says Pooja Pandey, “This role and character honestly takes a lot out of you emotionally and physically. I was moved by the script and just knew this story deserved to be told.”

Adds Vineet Kumar Singh, “Drishyam Films are known for movies and stories that have global appeal and yet are deeply rooted in India. While SIYA is based in India it has universal appeal because this concern is a global one.”

Produced by Drishyam Films, SIYA directed by Manish Mundra will release nationwide on the 16th of September 2022.