Kangana Ranaut starrer upcoming film Dhaakad will have a theatrical release on October 1, 2021. Kangana took to her social media on Monday to shared a new poster of her next action avatar. She looks fierce and ready to strike in a black with a sword in her hand. The movie also stars Arjun Rampal and Divya Dutta in pivotal roles. Kangana had unveiled the teaser of the film in August last year. The film is directed by Razneesh Ghai. 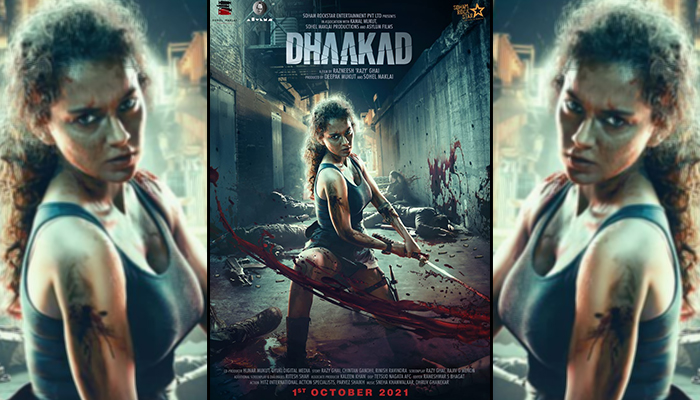 She essays the role of Agent Agni in action-drama. “She is fearless and Fiery! She is Agent Agni. India’s first female led action thriller, #Dhaakad releasing in theatres on 1st October 2021!” Kangana wrote on Twitter.

Kangana, who is gearing up for her upcoming film ‘Dhaakad’ is in Bhopal. She had earlier hosted a New Year brunch for her Dhaakad team and had shared pictures from the same. Praising her director Razy Ghai, she said, “Cheers to our Dhaakad team and our Chief…. our director Razy Ghai he is India’s top advert film maker, it’s his first film but so privileged to work with him, he is amazing.”

She also revealed that the makers of the film have roped in Japanese DOP Tetsuo Nagata an award-winning Japanese cinematographer based in France. She tweeted, “For #Dhaakad we have legendary french director of photography Tetsuo Nagata , his academy award winning work like La Vie en Rose has been an inspiration for whole world. Along with highly acclaimed international action crew @RazyGhai hoping to make world class spy triller.”

Apart from Dhaakad. She will also be seen in films such as “Thalaivi” and “Tejas”. Last week, Kangana announced a standalone sequel to her 2019 release, Manikarnika: The Queen of Jhansi. The film which is titled Manikarnika Returns: The Legend of Didda, is another historical drama about the story of Didda, the warrior queen of Kashmir.