Produced by Bhushan Kumar, Krishan Kumar, Luv Ranjan and Ankur Garg under their respective banners T-Series and Luv Films, De De Pyaar De has been slowed down now due to new offerings but still getting considerable response at box office across the country. The movie has been released with huge buzz among audience. 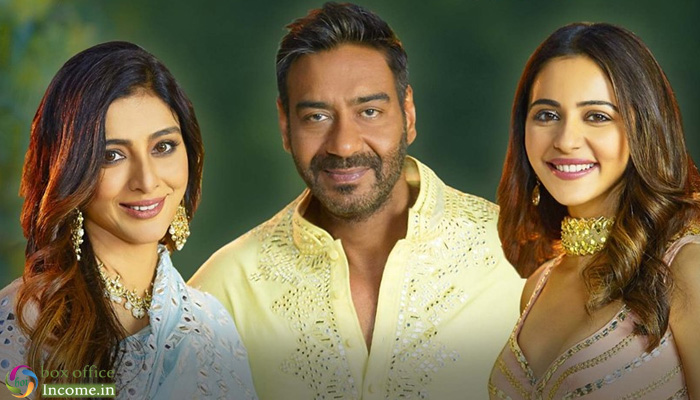 Ajay Devgn, Tabu and Rakul Preet Singh, this romantic comedy has got succeed to hit the target right and received mostly positive reviews from the critics as well as the audience. As a result, it gained a strong word of mouth and has already become the 6th highest grossing Hindi movie of the year so far.

By remaining rock-steady throughout, De De Pyaar De did the business of 61.05 crores. In the second & third week as well, the movie maintained a strong pace and bagged 23.44 crores & 12.52 crores respectively.

On its 4th Friday, Akiv Ali’s directorial faced a similar response than the previous day and did the business of 0.62 crore despite Salman Khan’s Bharat. On the next day i.e. 4th Saturday, it took a jump and minted the amount of 0.80 crores.

Then on 4th Sunday as well, De De Pyaar De witnessed similar response and collected the amount of 0.90 crores. With this, the total collection of the movie after 24 days, has become 99.33 crores at the domestic box office.

The film follows Ashish, a middle-aged non-resident Indian divorce; he decides to marry Ayesha, a young woman who is almost half his age. Chaos occurs when Ayesha is introduced to his family, including his ex-wife and children.