Ajay Devgn, Rakul Preet Singh and Tabu starrer De De Pyaar De has seen a massive success at the box office. The movie witnessed decent growth in select cities but it could not manage to get the collection in mass circuits. 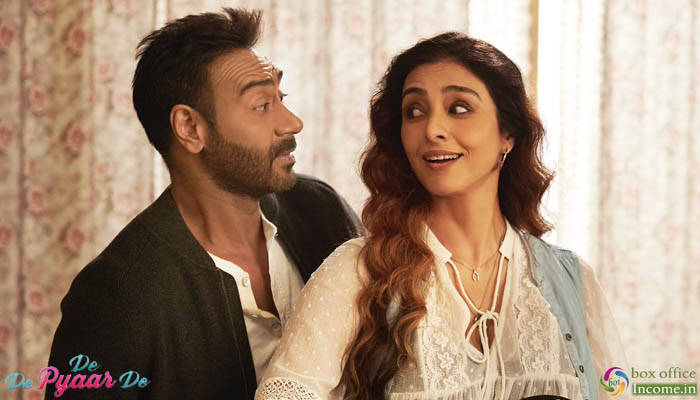 The strong word-of-mouth publicity and good performances by actors have, however, driven the audience to theatres to watch the film but the movie now has very little time to collect more as Salman Khan’s Bharat is all set to capture the theatres on Wednesday next week.

In the opening week, this Luv Films & T-Series Films’ collaboration had registered the business of 61.05 crores with 38.54 crores on the weekend and 22.51 crores on weekdays. Then in the second week as well, it remained strong and raked 23.44 crores that included 14.04 crores of the weekend and 9.40 crores of weekdays.

After the two successful weeks, now Akiv Ali’s directorial is on the third weekend and still has a good hold over the audience despite several new Hindi offerings in the opposite. On its 3rd Friday, it raked 1.96 crores with a minimal drop than the previous day.

On the next day i.e. 3rd Saturday, De De Pyaar De took a remarkable growth and minted the amount of 2.82 crores. With this, its 16 days total collection has become 89.27 crores at the domestic box office. De De Pyaar De was released on 17 May 2019 on more than 3100 screens in India and 650 plus screens outside.