Tamil superstar Chiyaan Vikrams’s fans can’t contain their excitement. As finally it has been confirmed that the title and first look poster from their favourite actor’s next will be unveiled on 20 August 2021. Fans have been demanding the first look poster and announcement about the film’s title for a very long time. 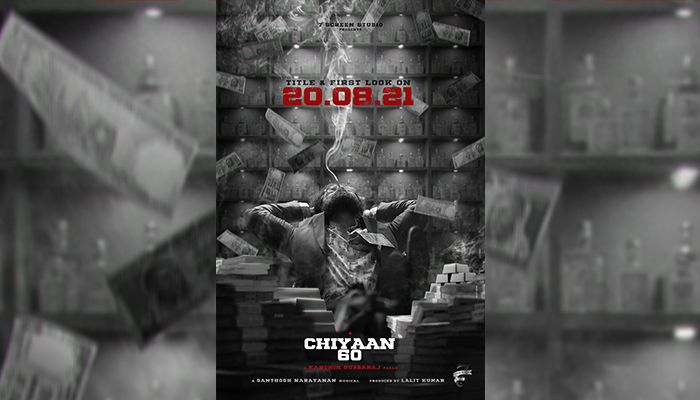 In the new monochrome poster, leading man Vikram is seen in a never-seen-before avatar in a retro-style tuxedo, which is paired with aviator glasses and cigarette smoke on his lips. The talented actor is seen amidst flying currency notes, a large shelf of liquor bottles, and gold bars. From the new poster, it is confirmed that the National award-winning actor is playing the role of a gangster in Chiyaan 60.

The film which is helmed by Karthik Subbaraj Padam happens to be one of the hottest topics for discussions among cine-goers. This Chiyaan Vikram and Dhruv Vikram starrer and also one of the biggest releases for 2022.

Chiyaan 60 will have the National award-winning actor Bobby Simha in a pivotal role. The movie features an extensive star cast including Simran, Vani Bhojan, Muthukumar, Sananth, and others in pivotal roles. Santhosh Narayanan is composing the songs and original score for the project. The Vikram starrer, which is produced by Seven Screen Studios.