After a solid opening weekend, the Hollywood biggie Captain Marvel has entered on weekdays at a steady note. Despite being a foreign film & having several new plus existing offerings in its opposite, it is heading unaffectedly at the Indian box office with a good lead over them. 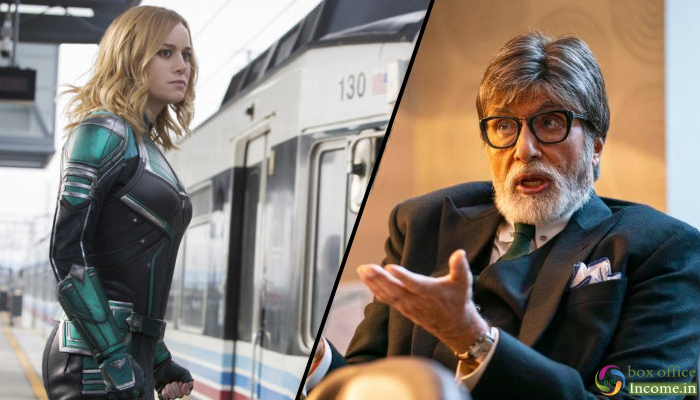 Nicole Perlman and Meg LeFauve starrer Captain Marvel has received mostly positive reviews from the critics and getting a superb response from the Indian audience. With its stunning visuals & gripping story, Anna Boden and Ryan Fleck’s directorial is making the desired impact on viewers.

After a good start, Marvel Studios’ presentation remained strong throughout the weekend and did the business of 13.01 crores on Friday, 14.10 crores on Saturday & 13.60 crores on Sunday. On Monday, it managed to collect 4.87 crores and raised 4 days total collection to 45.58 crores nett.

Amitabh Bachchan and Taapsee Pannu starrer Hindi mystery crime thriller Badla has also got succeed to gather positive feedback and registered an ordinary opening. In the opening weekend, it did the business of 23.20 crores with 5.04 crores on Friday, 8.55 crores on Saturday & 9.61 crores on Sunday.

Official adaptation of the 2017 Spanish film ‘The Invisible Guest’, Badla faced a usual drop in footfalls on Monday but still managed to remain steady and collected the amount of 3.75 crores. With this, its 4 days total collection has become 26.95 crores at the domestic box office.